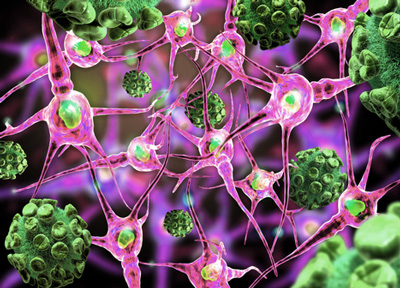 This finding provides a new target for potential drug treatments for the disease.

MD is an inherited genetic condition that gradually causes a weakening of muscles. Duchenne muscular dystrophy (DMD) is the most common, and one of the most severe types, of the disease. There are around 2,500 people in the UK living with DMD, which usually affects boys in early childhood and leads to progressively worsening disability and premature death.

In DMD, the stem cells that normally repair damaged muscle are impaired, for reasons that remain unclear. In this new study, University of Liverpool researchers looked at the molecular composition of the environment within which these muscle stem cells are found, to investigate whether this could be responsible for impaired function.

Using proteomics to examine altered protein levels in muscle cells in mice, the team identified an enzyme protein called neutrophil elastase that was found to be more abundant in dystrophic muscle as compared to healthy muscle.

Elastase breaks down several proteins found in the connective tissue that is present in various organs, including muscle. The enzyme is produced by white blood cells called neutrophils, which play an important role in inflammatory and immune responses and may be a key contributor to the development of muscular dystrophy.

Under experimental conditions, the researchers then demonstrated that elevated levels of elastase dramatically reduce the survival and operation of muscle stem cells in culture.

Lead researcher Dr Dada Pisconti, from the University’s Institute of Integrative Biology, said: “Our findings evidence the importance of inflammation in muscular dystrophy, and suggest that elevated levels of elastase could play a key role in the progressive muscle degeneration seen in patients affected by DMD.

“Although there is no cure for muscular dystrophy, improvements in treatments could help control symptoms to improve quality of life. Our next steps are to investigate whether drugs that target elastase are effective and safe as a potential therapy for this disease.”