Researchers have identified an enzyme, Nek1, that separates DNA replication from repair. The discovery could be significant in the treatment of tumours… 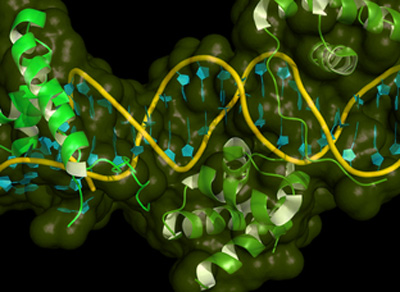 They say this discovery could be of tremendous significance in the treatment of tumours.

Several essential processes take place in separate compartments within a cell. The cell’s most important asset, DNA, is packed inside the cell nucleus, and a veritable armada of proteins is responsible for the organisation, replication and protection of the DNA. Many of these proteins perform a number of tasks, for instance possessing functions at the replication fork and repairing damage to DNA. Most of the mechanisms for the individual functions of these proteins are understood, but there has as yet been little research into the coordination and regulation between the various processes.

Biologists at the TU Darmstadt under Prof. Dr. Markus Löbrich and Dr. Julian Spies have collaborated with their colleagues at the University of California in Davis and identified a protein kinase called Never-in-mitosis A-related kinase 1 (Nek1) that promotes the repair of DNA double-strand breaks and separates this repair from replication. Nek1 switches on the motor protein Rad54 only after the completion of replication in order to finalize the repair process. This is of physiological relevance because during replication, Rad54 possesses additional functions at the replication fork, and premature activation of Rad54 results in a major disturbance of the replication process, report the Darmstadt-based researchers in the renowned research journal Molecular Cell.

This discovery has potential for use in the development of entirely new kinds of cancer treatments. Finding inhibitors that block the function of Nek1 would lead to a loss in the repair function. Tumour cells in particular would suffer from this loss of function in Nek1, since they experience a tremendous amount of DNA damage during their uncontrolled growth. The scientists suspect that the inhibition of Nek1 could be associated with an accumulation of unrepaired DNA damage in these cells that could cause the tumour cells to die. The team of researchers plans to continue to investigate these assumptions over the coming years.