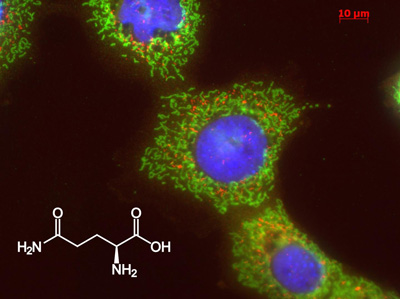 Scientists at Ecole Polytechnique Fédérale de Lausanne (EPFL) have found a way to starve liver cancer cells by blocking a protein that is required for glutamine breakdown.

Primary liver cancer is the second leading cause of cancer-related deaths worldwide. Liver cancer cells are particularly addicted to the amino acid glutamine, which fuels their proliferation. EPFL scientists have now found that a liver protein called “liver receptor homolog 1” (LRH-1) is responsible for the digestion of glutamine into smaller molecules, which are avidly consumed by liver cancer cells. Blocking LRH-1 causes cancer cells to starve and greatly reduces the development of liver cancer in mice, while preserving normal cells. The discovery may lead to new drugs that target LRH-1 to effectively treat liver cancers.

LRH-1 is a receptor in the cell nucleus, where it regulates the expression of various genes. In this study, scientists led by Kristina Schoonjans, discovered that LRH-1 coordinates several key genes that are involved in the metabolism of glutamine. The researchers found that LRH-1 drives the development of liver tumours by helping cancer cells to convert glutamine into molecules that are directly needed for proliferation.

This would also mean that disrupting the function of LRH-1 in the liver of mice would protect against the development of liver cancers. That is exactly what the scientists found when they studied mice that had been genetically modified to not express LRH-1 – so called “knockout” mice. After exposing them to chemical carcinogens, the livers of knockout mice showed dramatically less development of tumours.

Based on the study, LRH-1 could be a new drug target to prevent the development of liver cancer. Because cancer cells, unlike normal cells, are very often addicted to glutamine, drugs that inhibit glutamine metabolism have been proposed as new highly efficient chemotherapy agents.