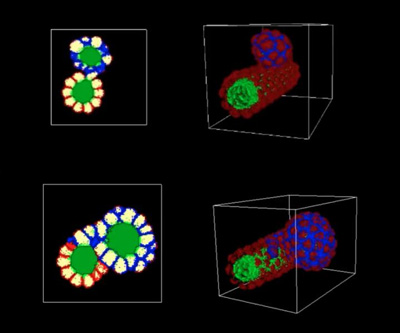 Researchers at Indiana University have identified a potential new drug target in the fight against polycystic kidney disease.

Their study reveals that errors in how cells stick together give rise to two forms of kidney cysts.

“This is the first study to show the actual cell behaviours caused by mutations in genes causally linked to polycystic kidney disease, an important new step in the path towards treatment,” said Dr Robert L. Bacallao, associate professor of medicine at the IU School of Medicine in Indianapolis.

The virtual tissue technology used in the study was developed by the Biocomplexity Institute at the IU School of Informatics and Computing, directed by James A. Glazier, professor in the IU Bloomington Department of Intelligent Systems Engineering..

“Not many medical researchers are employing virtual tissue technology,” Glazier explained. “The majority of researchers who use these simulations are pursuing basic science. So it’s extremely exciting to apply the technology to research directed at identifying drug targets to help people suffering from a specific disease.”

Cysts that resulted from reduced cell adhesion were mushroom-shaped, with a stalk and a cap that comprised the bulk of the cyst. Cysts that resulted from loss of contact inhibition proliferated like plaques along the walls of the nephron, then buckled to form “disorganised” cysts. Both types of growth can be seen in video animations generated by the CompuCell3D software.

After running the simulations at IU Bloomington, Bacallao confirmed the cyst growth predictions seen in the virtual cysts in experiments using real human cells cultivated from polycystic kidneys from patients at the IU School of Medicine.

“The computer predictions were absolutely correct,” said Bacallao, who estimated that the same experiments, which took several weeks, would have required 10 to 20 years to conduct in mice.

“Now that we know that we’re looking at two different types of cyst that develop in two different ways, we will refine the computer modelling to identify the specific molecular signals leading to each type of cyst,” Glazier said.

Cocaine and the brain: identifying targets for addiction therapies

Gender-specific coronavirus infections in the light of evolution