Since the early seventies, scientists have been developing brain-machine interfaces; the main application being the use of neural prosthesis in paralyzed patients or amputees. A prosthetic limb directly controlled by brain activity can partially recover the lost motor function. This is achieved by decoding neuronal activity recorded with electrodes and translating it into robotic movements. Such systems however have limited precision due to the absence of sensory feedback from the artificial limb. 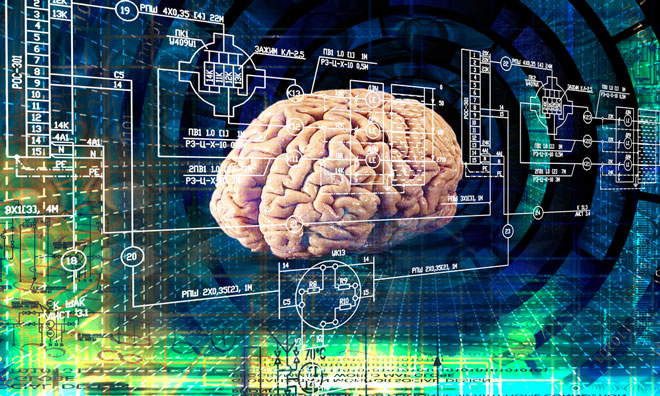 Neuroscientists at the University of Geneva (UNIGE), Switzerland, asked whether it was possible to transmit this missing sensation back to the brain by stimulating neural activity in the cortex. They discovered that not only was it possible to create an artificial sensation of neuroprosthetic movements, but that the underlying learning process occurs very rapidly. These findings were obtained by resorting to modern imaging and optical stimulation tools, offering an innovative alternative to the classical electrode approach.

Motor function is at the heart of all behavior and allows us to interact with the world. Therefore, replacing a lost limb with a robotic prosthesis is the subject of much research, yet successful outcomes are rare. Why is that? Until this moment, brain-machine interfaces are operated by relying largely on visual perception: the robotic arm is controlled by looking at it.

The direct flow of information between the brain and the machine remains thus unidirectional. However, movement perception is not only based on vision but mostly on proprioception, the sensation of where the limb is located in space.

“We have therefore asked whether it was possible to establish a bidirectional communication in a brain-machine interface: to simultaneously read out neural activity, translate it into prosthetic movement and reinject sensory feedback of this movement back in the brain”, explains Daniel Huber, UNIGE.

Using a method called two-photon microscopy, they routinely measure the activity of hundreds of neurons with single cell resolution.

“We wanted to test whether mice could learn to control a neural prosthesis by relying uniquely on an artificial sensory feedback signal”, explains Mario Prsa, researcher at UNIGE and the first author of the study. “We imaged neural activity in the motor cortex. When the mouse activated a specific neuron, the one chosen for neuroprosthetic control, we simultaneously applied stimulation proportional to this activity to the sensory cortex using blue light”.

Indeed, neurons of the sensory cortex were rendered photosensitive to this light, allowing them to be activated by a series of optical flashes and thus integrate the artificial sensory feedback signal. The mouse was rewarded upon every above-threshold activation, and 20 minutes later, once the association learned, the rodent was able to more frequently generate the correct neuronal activity.

This means that the artificial sensation was not only perceived, but that it was successfully integrated as a feedback of the prosthetic movement. In this manner, the brain-machine interface functions bidirectionally.

The Geneva researchers think that the reason why this fabricated sensation is so rapidly assimilated is because it most likely taps into very basic brain functions. Feeling the position of our limbs occurs automatically, without much thought and probably reflects fundamental neural circuit mechanisms. This type of bidirectional interface might allow in the future more precisely displacing robotic arms, feeling touched objects or perceiving the necessary force to grasp them.

At present, the neuroscientists at UNIGE are examining how to produce a more efficient sensory feedback. They are currently capable of doing it for a single movement, but is it also possible to provide multiple feedback channels in parallel? This research sets the groundwork for developing a new generation of more precise, bidirectional neural prostheses.

Towards better understanding the neural mechanisms of neuroprosthetic control

By resorting to modern imaging tools, hundreds of neurons in the surrounding area could also be observed as the mouse learned the neuroprosthetic task.

“We know that millions of neural connections exist. However, we discovered that the animal activated only the one neuron chosen for controlling the prosthetic action, and did not recruit any of the neighbouring neurons”, adds Daniel Huber. “This is a very interesting finding since it reveals that the brain can home in on and specifically control the activity of just one single neuron”.

Researchers can potentially exploit this knowledge to not only develop more stable and precise decoding techniques, but also gain a better understanding of most basic neural circuit functions. It remains to be discovered what mechanisms are involved in routing signals to the uniquely activated neuron