‘Immunoswitch’ particles may be key to more effective cancer immunotherapy

Scientists have created a nanoparticle that carries two different antibodies capable of simultaneously switching off cancer cells’ defensive properties while switching on a robust anti-cancer immune response in mice. 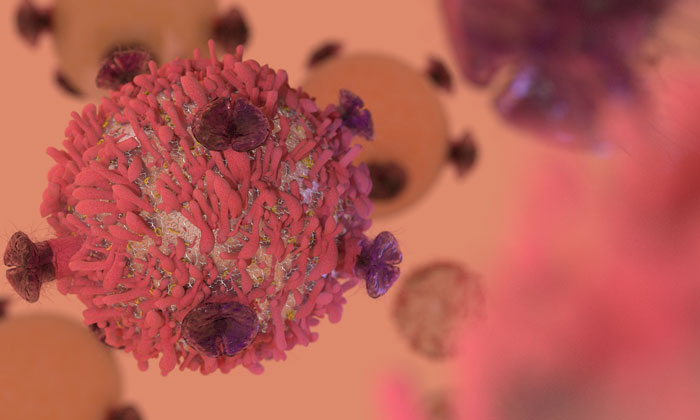 Experiments with the tiny, double-duty ‘immunoswitch’ found it able to dramatically slow the growth of mouse melanoma and colon cancer and even eradicate tumours in test animals, researchers from Johns Hopkins report.

The findings, described online June 7 in ACS Nano, could lead to ways to boost the effectiveness and promise of immunotherapies in people with cancer, the investigators say.

“Immunotherapies have significant potential and yet room for improvement,” says Jonathan P. Schneck, M.D., Ph.D., Professor of Pathology in the Johns Hopkins University School of Medicine’s Institute for Cell Engineering and a member of the Johns Hopkins Kimmel Cancer Center.

“The improvement here was to make, for the first time, a nanoparticle that can interact simultaneously with multiple types of cells in the complex tumour microenvironment, dramatically increasing its effectiveness.”

Schneck and study co-leader Alyssa K. Kosmides, a graduate student in his laboratory, explain that several cancer treatments designed to stimulate a patient’s immune system to fight the disease have been approved by the U.S. Food and Drug Administration, including three known as checkpoint inhibitors. Those drugs help overcome cancer cells’ ability to evade a person’s immune system by using antibodies to shut down proteins on tumour cell surfaces that hide them from immune cells.

However, they point out, checkpoint inhibitors work only in a relatively limited number of patients and against a small number of cancers so far. Follow-up studies show that overall response rates against melanoma, bladder cancer, Hodgkin’s lymphoma and non-small cell lung cancer is around 30%, and complete response rates, resulting in eradication of a patient’s tumours, are as low as 5%.

But combining multiple forms of immunotherapy in doses high enough to be effective can cause severe, even life-threatening, side effects.

For their study, the Johns Hopkins researchers combined two different immunotherapy strategies on manmade nanoparticles about 1,000 times smaller in diameter than a human hair, similar to drug-delivery platforms already in use in some cancer therapies, including chemotherapies such as Doxil, Abraxane and Myocet.

Nanoparticles have clear advantages over free drug, Kosmides explains, such as their “enhanced permeability and retention effect,” which causes nanosized particles to be taken up more readily by tumour cells than by healthy cells. Additionally, each particle can hold dozens of antibodies at once, which dramatically raises the local concentration of antibodies. This makes them more effective and reduces the chances of side effects, Schnecksays.

Using paramagnetic iron particles about 100 nanometers in diameter, the researchers placed two different kinds of antibodies on them: one blocks a protein called programmed death ligand 1 (PD-L1), which cancer cells use to cloak themselves from immune cells; another that stimulates T cells, a type of immune cell that fights cancer. By combining these two functions, the goal was to effectively switch off a tumour’s immune-inhibiting ability while simultaneously switching on the immune system’s capacity to attack.

In mice injected with mouse melanoma cells, which grew into tumours over the course of several days, only mice who subsequently received the immunoswitch particles had significantly delayed tumour growth and longer survival compared to those who received the control treatments or no treatment.

The researchers say they found even more dramatic results in a mouse model of colon cancer. In those experiments, about half the mice had a complete regression of tumours and about 70% could be considered long-term survivors, living more than 55 days.

Looking for the mechanism behind the immunoswitch particles’ positive effects, further experiments showed that the particles appear to bring cancer cells and the immune cells that fight them together more easily, providing a synergy that’s not possible even with the same two antibodies on separate particles. The immunoswitch particles also were retained in tumour cells significantly longer than soluble antibodies, offering more time for them to work, Schneck and Kosmides say.

The researchers plan to work on improving the immunoswitch particles by searching for more effective combinations of antibodies to include on the platform. Because the particles are magnetic, they also plan to test whether results can be improved by using magnets to guide the particles and keep them at the tumour site.