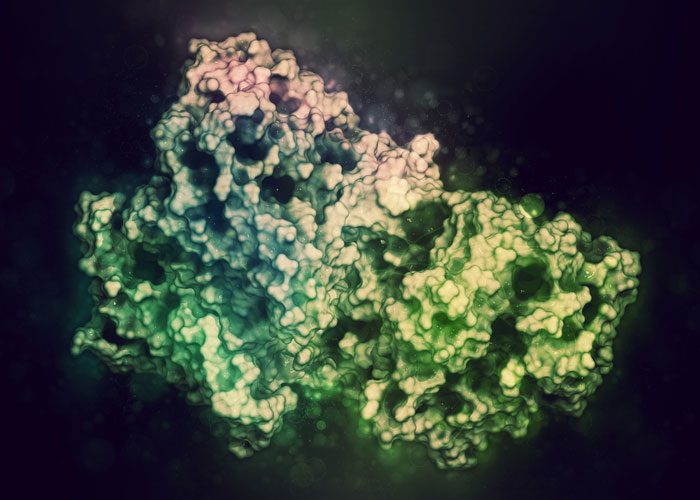 Researchers have used cryo-electron microscopy to solve the structure of a protein complex critical for gene expression.

The study, led by Dr Lori Passmore from the MRC Laboratory of Molecular Biology, is the first to reveal the structure of an important part of the protein, called cleavage and polyadenylation factor (CPF).

CPF is a complex enzyme made up of many subunits. Cryo-electron microscopy has revolutionised scientists’ ability to discover the structure of large, flexible and complex proteins like this in their natural form.

Dr Passmore, senior author on the paper and group leader at the MRC LMB, said: “Understanding the structure and function of intact CPF, and how it is assembled, has been a central question in the field of gene expression for decades – it’s such a fundamental protein but we still don’t understand how it works. This was a huge technical challenge because very few structures have been built entirely from scratch using cryo-EM data. We were very excited to finally build the first atomic model of the structure of part of CPF.”

Gene expression – turning the instructions encoded in DNA into proteins – requires a number of important steps. Enzymes copy the gene and produce a single-stranded version of the DNA, called messenger RNA (mRNA).

The mRNA can travel out of the nucleus of the cell, where the DNA is housed, to the cytoplasm where cellular machinery uses the mRNA’s instructions to assemble a protein.

The CPF enzyme is a necessary part of this process – it adds a long string of adenosine molecules, called a ‘poly-A tail’, to the end of each new mRNA.

This tail is important because the length of the tail specifies the amount of time that the mRNA is present in the cell, and how often it is translated into proteins. The poly-A tail is also necessary for the mRNA to be transported out of the nucleus.

Viral infections, such as influenza, target CPF within the cell and disrupt gene expression. The researchers identified a site on CPF where a protein from the virus can bind in a way that may block CPF from interacting with mRNA, and thereby halt gene expression in the cell to the virus’ advantage.

The scientists say this structure will also help them to better understand how CPF works and how defects in poly-A tail addition contribute to diseases – including β-thalassemia, thrombophilia, and cancer.

Dr Passmore said: “This has been a long-term project in my lab and many people have contributed to it over the past seven years. I still remember seeing the first images of CPF in 2010. Now, having the structure of CPF will enable future research into how this important protein works in normal cells, but it also opens up opportunities to understand its role in viral infections and diseases such as cancer.”

This research was conducted in collaboration with researchers at the University of Oxford and was funded by the MRC, the European Research Council (ERC), EMBO and Gates Cambridge.

The paper has been published in Science.