Final numbers are in: 42 million protein molecules in a yeast cell

Researchers have officially revealed the abundance of protein molecules in a single cell runs into the tens of millions: around 42 million, to be precise. 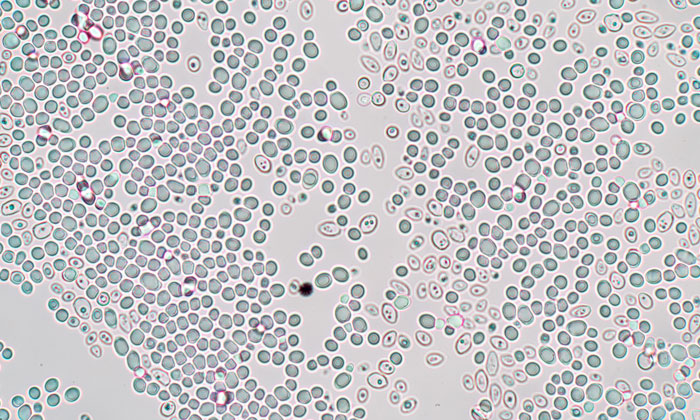 Through extensive data analysis of yeast cell protein abundance, a team of researchers at the University of Toronto‘s Donnelly Centre for Cellular and Biomolecular Research has produced reliable estimates of the number of molecules in each protein of a cell and, thus, the total number within a single cell.

The work was led by Biochemistry Professor, Grant Brown, and carried out in collaboration with Anastasia Baryshnikova – a University of Toronto alum and now Principal Investigator at Calico, a California biotechnology company that focuses on ageing.

Proteins: the building blocks of cells

Proteins make up our cells and do most of the work in them. They bring genetic code to life because the recipes for building proteins are stored within the genes’ DNA code.

Illuminating the effects of their work, Brown said: “the cell is the functional unit of biology; it’s just a natural curiosity to want to know what’s in there and how much of each kind.”

Many diseases are caused by an excess or lack of a certain protein, therefore – curiosity aside – the more we know about how protein abundance is controlled, the more likely we’ll be able to fix it when it goes awry.

Although researchers have studied protein abundance for years, the findings were reported in arbitrary units, sowing confusion in the field and making it hard to compare data between different labs.

“It was hard to conceptualise how many proteins there are in the cell because the data was reported on drastically different scales,” said Brandon Ho, graduate student in the Brown lab who did most of the work on the project.

To convert arbitrary measures into the number of molecules per cell, Ho turned to baker’s yeast – a single-cell microbe that is both easy to study and offers a window into the workings of a basic cell. Yeasts are also the only organism for which there was sufficient available data to calculate molecule numbers for each of the 6,000 proteins encoded by the yeast genome – thanks to 21 separate studies that measured abundance of all yeast proteins. No such datasets exist for human cells where each cell type contains only a subset of proteins encoded by the 20,000 human genes.

The wealth of existing yeast data meant that Ho could put it all together, benchmark it and convert the vague measures of protein abundance into “something that makes sense, in other words, molecules per cell,” said Brown.

“This study will be of great value to the entire yeast community and beyond,” said Robert Nash, Senior Biocurator of the Saccharomyces Genome Database that will make the data available to researchers worldwide. He also added that by presenting protein abundance “in a common and intuitive format, the Brown lab has provided other researchers with the opportunity to re-examine this data and thereby facilitate study-to-study comparisons and hypothesis generation.”