Genomic analysis unravels complexities of the most common form of lymphoma

Genomic analysis has shown a better framework for understanding lymphoma’s many forms and will help to predict individual patient outcomes and guide personalised treatment. 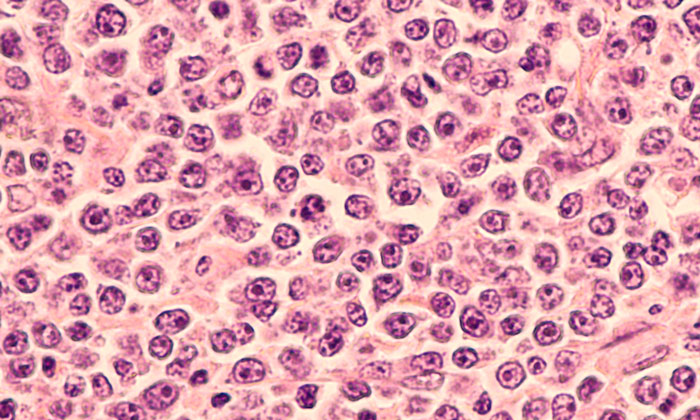 These genetic subtypes can help in identifying likely therapeutic targets, some of which can be inhibited by drugs that already are approved for other conditions or in clinical trials, says Shipp.

“These genetic signatures also clearly suggest that we want to think about using a combination of targeted agents, because in DLBCL, combinations of genetic alterations occur together in specific subtypes,” she says.

Diffuse large B cell lymphoma (DLBCL) is the most common form of lymphoma among adults. About 60% of patients can be treated successfully with a combination of four chemotherapies plus a targeted drug that inhibits a B cell surface protein. However, people whose disease recurs face a shortage of good options, especially because the disease is driven by a complicated mix of genetic alterations.

Current clinical tests do a relatively good job of predicting which patients with DLBCL can be treated effectively with standard treatments, but the tests do not offer insights into how treatments could be improved for other patients. The Dana-Farber/Broad collaboration is among several research groups bringing genomic tools to this task. An earlier effort led by National Cancer Institute (NCI) scientists established a widely used ‘cell of origin’ classification scheme for DLBCL, which employed RNA profiling to categorise tumour cells by stages of normal B-cell development.

“Specific genes that were perturbed by mutations could also be altered by changes in gene copy numbers or by chromosomal rearrangements, underscoring the importance of evaluating all three types of genetic alterations,” Shipp notes.

“Most importantly, we saw that there were five discrete types of DLBCL that were distinguished one from another on the basis of the specific types of genetic alterations that occurred in combination.”

The investigators followed up to examine these tumour subtypes by RNA data associated with cell of origin. They found that each of the two major cell-of-origin subtypes could be split into separate categories with distinct genetic signatures. An additional subtype defined by TP53 gene alterations and associated genomic instability was unrelated to cell of origin. The team then went on to discover clear links between given genetic subtypes and how patients responded to standard treatment.

“We feel this research opens the door to a whole series of additional investigations to understand how the combinations of these genetic alterations work together, and then to use that information to benefit patients with targeted therapies,” says Shipp.

The study underlined the high genetic diversity in DLBCL – for instance, the median number of genetic driver alterations in individual tumours was 17. “That large number of alterations tells us that we need to understand the complexity of the genetic signature, because it’s unlikely that simply focusing on one genetic alteration will be enough to target therapeutically,” Shipp points out.

She and her collaborators are now working on creating a clinical tool to identify these genetic signatures in patients. Studying related biological mechanisms in the lab, the team also is developing clinical trials that will match patients with given genetic signatures to treatment that includes appropriate targeted agents.