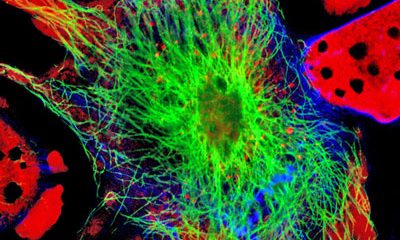 The new OH14 compound has been licensed by Tiziana Life Sciences. It will now undergo further development before proceeding to clinical trials. Preclinical studies have shown it to be effective in eliminating a number of different kinds of cancers cells, including cancer stem cells from human breast cancer patient biopsies.

The breakthrough comes almost exactly a year after the same research team announced that they had discovered a molecule capable of reversing the spread of malignant breast cancer. The multidisciplinary team is comprised of researchers based in Cardiff University’s European Cancer Stem Cell Research Institute (ECSCRI) and the School of Pharmacy and Pharmaceutical Sciences.

Last January, state-of-the-art computer aided modelling enabled the researchers to identify an anti-cancer agent capable of deactivating a gene known to be essential for the metastatic spread of breast cancer. Using the same computer-based approach, the team has now been able to target the c-FLIP (cellular FLICE [FADD-like IL-1β-converting enzyme]-inhibitory) protein, known to play a key role in cancer stem cell maintenance and survival, described in previously published work by the Institute.

According to the scientists’ findings, targeting c-FLIP with the OH14 compound works on two fronts: first by helping to deactivate the tumour’s self-defense mechanism against the immune system and second to prevent its regrowth. The main function of the c-FLIP protein is to prevent the TNF-related apoptosis-inducing ligand (TRAIL) from killing cells. TRAIL is a naturally occurring and crucial molecule that is used by the body’s immune system to kill damaged or cancerous cells.

The researchers hope that ultimately human trials will prove the efficacy of the OH14 compound in sensitising tumour cells and cancer stem cells to existing drug-based therapies thus disabling tumours from seeding new growth after treatment.

The new compound is the first experimental anti-cancer stem cell agent to have emerged from the European Cancer Stem Cell Research Institute. Having acquired the licence for its commercialisation, Tiziana Life Sciences has committed funding for ongoing research that will focus on drug development.

Tiziana Life Sciences was founded in 2014 after licencing the BCL3 cancer agent that was developed by the same Cardiff University team.

Dr Richard Clarkson, lead researcher on the c-FLIP project and senior researcher at Cardiff University’s ESCRI, said: “We are delighted to extend our relationship with Tiziana Life Sciences. OH14 is an example of a new generation of experimental agents designed to selectively target the pernicious stems cells within a tumour, thus improving the long-term prospects of cancer patients.”

Gabriele Cerrone, Chairman of Tiziana Life Sciences, said: “This agreement further strengthens our portfolio of exciting preclinical assets to complement our Phase II assets of milciclib and foralumab. We look forward to working with the University to identify further inhibitors of c-FLIP. We will then seek to develop the most promising of these into novel drugs for cancers, such as those of the breast, where up-regulation of this c-FLIP is believed to be important in cancer cell proliferation.”

Dr Robert Clarke, from the University of Manchester’s Institute of Cancer Sciences, said: “This is an exciting development from a Cardiff team that is expert in the mechanics of regulating cell death. The drug that they have developed appears to target cancer stem cell activity, which suggests it will prevent metastatic recurrence and be useful in combatting drug resistance.”

Dr Lee Campbell, Research Projects and Science Communications Manager at Cancer Research Wales, who part-fund the study, commented: “This is an exciting breakthrough as cancer stem cells are thought to be responsible for the failure of many cancer treatments and the re-emergence of cancers, often many years after the initial disease.

“Therefore the ability to eliminate cancer stem cells from the body offers the opportunity to totally eradicate stubborn and residual disease once and for all. As a charity we are proud to be associated with such ground-breaking research here in Wales and look forward to seeing how these new compounds perform in patients.”