Researchers have determined the molecular structure of amyloid beta-42, one of the proteins in the brain plaques that are a hallmark of Alzheimer’s disease… 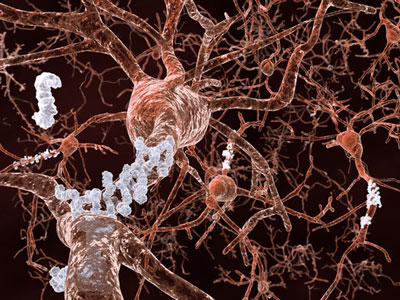 Researchers at the University of Illinois at Chicago (UIC) have determined the molecular structure of amyloid beta-42, one of the proteins in the fine fibres of the brain plaques that are a hallmark of Alzheimer’s disease.

Amyloid beta-42, is toxic to nerve cells and is believed to provoke the disease cascade. Knowing the physical structure of the 42 amino acid-long form of amyloid beta in the fibers is key to understanding how it folds up improperly and aggregates into toxic plaques, says Yoshitaka Ishii, UIC professor of chemistry and principal investigator on the study.

Ishii and his colleagues found that amyloid beta-42 in amyloid fibrils forms three flat structures (called beta sheets) that turn back and forth to layer over each other in an“S” pattern. They also found that the final amino acid on the protein forms a “salt bridge” with an amino acid at the first turn of the S, stabilizing the structure. A salt bridge is a bond between positive- and negative-charged molecules or parts of a molecule.

The 3D structure is strikingly different from that of amyloid beta-40, a chemically similar and more abundant protein also linked to Alzheimer’s. Amyloid beta-40 lacks the final amino acid that carries the negative charge needed to form the salt bridge.

“This explains why amyloid beta-42 doesn’t interact with amyloid beta-40, or recruit it into the plaques that are toxic to nerve cells,” Ishii said.

The structural features and folding behavior of amyloid beta-42 “offer a new perspective on amyloid propagation in Alzheimer’s disease and, perhaps, other neurodegenerative disease,” said Ishii. Drugs designed to act against amyloid beta-40, he said, “may not work well against the more toxic amyloid beta-42.”

The chemical nature of amyloid beta-42 – especially its extreme aversion to water – posed a formidable challenge to chemists and structural biologists, Ishii said. “There are a number of laboratories that have been working on this problem, and I am very proud of the work of my graduate student Yiling Xiao in elucidating its structure.” Xiao is first author on the study.

The study is online in the journal Nature Structural and Molecular Biology.