Melanoma patients with high levels of a protein that controls the expression of pro-growth genes are less likely to survive, according to a new study… 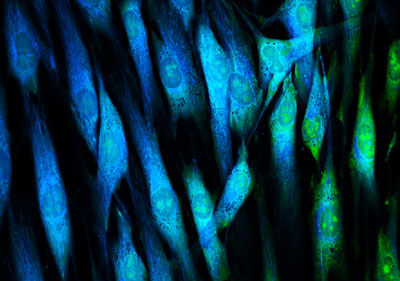 Melanoma patients with high levels of the protein H2A.Z.2 are less likely to survive, according to a new study.

The research team, led by researchers at Icahn School of Medicine at Mount Sinai, found that H2A.Z.2 promotes the abnormal growth seen in melanoma cells as they develop into difficult-to-treat tumours. H2A.Z.2 is part of the chromosome structure that packages genes, and has the ability to switch them on and off. Having high levels of this protein aberrantly activates growth-promoting genes in melanoma cells.

An emerging theory in cancer research is that abnormal growth may result not only from unfortunate, mutations in patients’ genes, but also from epigenetic mechanisms that turn genes on and off. In the current study, scientists found that blocking the functions of H2A.Z.2, either alone or in combination with cancer therapies, effectively blocked tumour growth and killed melanoma cells.

“Cancer is a disease consisting of both genetic and epigenetic changes,” said Emily Bernstein, PhD, Associate Professor of Oncological Sciences and Dermatology, the Icahn School of Medicine at Mount Sinai. “I believe that the study of epigenetic mechanisms may lead to the development of new approaches for molecular diagnosis and targeted treatments.”

Research has only “scratched the surface” of the epigenetic mechanisms involved in cancer, Bernstein said. Gaining insights will pave the way for the design of innovative therapeutic regimens in melanoma as well as in other cancer types, she said.

The study findings are published in the journal Molecular Cell.