Researchers have reconstructed an ancient virus that is highly effective at delivering gene therapies to the liver, muscle, and retina… 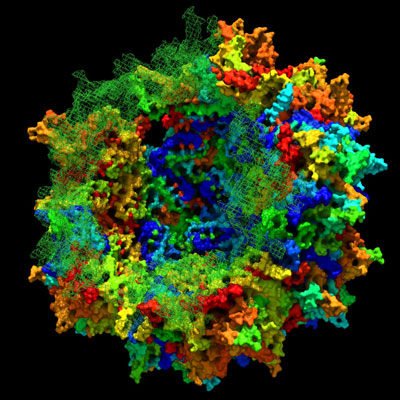 Researchers have reconstructed an ancient virus that is highly effective at delivering gene therapies to the liver, muscle, and retina.

This discovery could potentially be used to design gene therapies that are not only safer and more potent than therapies currently available, but may also help a greater number of patients.

“We believe our findings will teach us how complex biological structures, such as AAVs (adeno-associated viruses), are built,” said Luk H. Vandenberghe of Massachusetts Eye and Ear and Harvard Medical School Department of Ophthalmology. “From this knowledge, we hope to design next-generation viruses for use as vectors in gene therapy.”

Given its basic nature, a virus can be an ideal delivery system for gene therapy. In order to survive, a virus must infiltrate a host organism undetected and transfer its genetic material into the host’s cells, where it will use the host to replicate and proliferate. Taking advantage of this, researchers can insert therapeutic genes into a virus, then use the viruses to shuttle the genes to the appropriate cells or tissues inside a human body.

So far, AAVs used for gene therapy have been chosen from viruses that naturally circulate throughout the human population. If patients have been exposed to the virus, their bodies will likely recognise the virus, mount an attack, and destroy it before it can deliver the therapy. Engineering new, benign viruses could render the viruses unrecognisable and increase the number of people for whom a given gene therapy will work.

However, efforts to engineer improved AAVs have been stymied by the intricate structure of these viruses. Like pieces of a jigsaw puzzle, every protein in the shell of the virus must fit together perfectly for the virus to function normally. Altering proteins in one part of the virus to achieve a certain benefit, such as more efficient gene transfer or reduced recognition by host immune cells, could end up destroying the structural integrity of the entire shell.

To overcome this challenge, Vandenberghe and his colleagues at Harvard Medical School, Schepens Eye Research Institute, and Mass. Eye and Ear have turned to evolutionary history for guidance. Over time, AAV ancestors have undergone a series of changes that kept the structural integrity of the virus while slightly altering some of its functions. The researchers were able recreate an evolutionary timeline of the changes and build in the laboratory nine synthetic ancestor viruses. When injected into mice, the most ancient, Anc80 successfully targeted the liver, muscle, and retina, without producing toxic side effects.

In future studies, the researchers will characterise the interplay between the virus and host throughout evolution and continue to seek improved vectors for clinical applications. They will also examine the potential of Anc80 for treating liver diseases and retinal forms of blindness. “The vectors developed and characterized in this study demonstrate unique and potent biology that justify their consideration for gene therapy applications,” concluded Vandenberghe.

The study findings are published in Cell Reports.