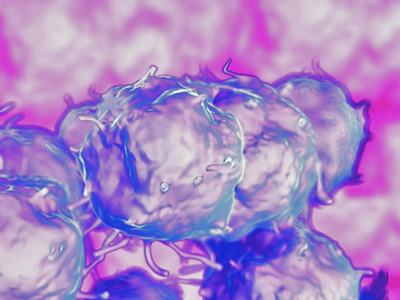 These cells could be used as the ‘Lego bricks’ to build tissue constructs, larger structures of tissues, and potentially even micro-organs.

“It was really exciting to see that we could grow embryoid body in such a controlled manner”, explains Wei Sun. “The grown embryoid body is uniform and homogenous, and serves as a much better starting point for further tissue growth.”

“Two other common methods of printing these cells are either two-dimensional (in a petri dish) or via the ‘suspension’ method (where a ‘stalagmite’ of cells is built up by material being dropped via gravity.)” continues Wei Sun. “However, these don’t show the same cell uniformity and homogenous proliferation.”

“I think that we’ve produced a 3-D microenvironment which is much more like that found in vivo for growing embryoid body, which explains the higher levels of cell proliferation.”

Embryoid body at a high throughput

The researchers hope that this technique can be developed to produce embryoid bodies at a high throughput, providing the basic building blocks for other researchers to perform experiments on tissue regeneration and/or for drug screening studies.

“Our next step is to find out more about how we can vary the size of the embryoid body by changing the printing and structural parameters, and how varying the embryoid body size leads to “manufacture” of different cell types” adds Rui Yao, another author on the paper.

“In the longer term, we’d like to produce controlled heterogeneous embryonic bodies” concludes Wei Sun. “This would promote different cell types developing next to each other – which would lead the way for growing micro-organs from scratch within the lab.”