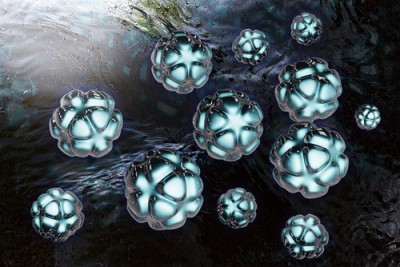 Researchers have developed ‘nanobombs’ – nanoparticles that swell and burst when exposed to near-infrared laser light.

The researchers, from The Ohio State University Comprehensive Cancer Centre – Arthur G. James Cancer Hospital and Richard J. Solove Research Institute (OSUCCC – James), say the nanobombs might overcome a biological barrier that has blocked development of agents that work by altering the expression of genes in cancer cells. The agents might kill cancer cells outright or stall their growth.

The kinds of agents that change gene expression are generally forms of RNA (ribonucleic acid), and they are notoriously difficult to use as drugs. First, they are readily degraded when free in the bloodstream. In this study, packaging them in nanoparticles that target tumour cells solved that problem.

This study suggests that the nanobombs might also solve the second problem. When cancer cells take up ordinary nanoparticles, they often enclose them in endosomes. This prevents the drug molecules from reaching their target, and they are soon degraded. However, nanobombs contain a chemical that vaporises, causing them to swell three times or more in size when exposed to near-infrared laser light. The endosomes burst, dispersing the RNA agent into the cell.

“A major challenge to using nanoparticles to deliver gene-regulating agents such as microRNAs is the inability of the nanoparticles to escape the compartments, the endosomes, that they are encased in when cells take up the particles,” says principal investigator Xiaoming (Shawn) He, PhD, associate professor of Biomedical Engineering and member of the OSUCCC – James Translational Therapeutics Programme.

The nanobombs encapsulate a leavening agent used in baking

For their study, He and colleagues used human prostate-cancer cells and human prostate tumours in an animal model. The nanoparticles were equipped to target cancer stem-like cells (CSCs). CSCs often resist therapy and are thought to play an important role in cancer development and recurrence.

The therapeutic agent in the nanoparticles was a form of microRNA called miR-34a. The researchers chose this molecule because it can lower the levels of a protein that is crucial for CSC survival and may be involved in chemotherapy and radiation therapy resistance.

The nanoparticles also encapsulate ammonium bicarbonate, which is a leavening agent sometimes used in baking. Near-infrared laser light, which induces vaporisation of the ammonium bicarbonate, can penetrate tissue to a depth of one centimetre. For deeper tumours, the light would be delivered using minimally invasive surgery.