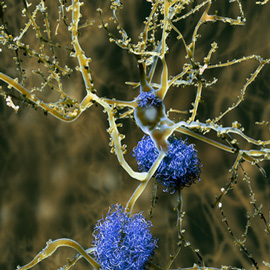 Neurodegenerative diseases are defined as hereditary and sporadic conditions characterised by progressive nervous system dysfunction. These disorders are often associated with atrophy of the affected central or peripheral structures of the nervous system, affecting movement (ataxias) or mental functioning (dementias) and include diseases such as Alzheimer’s (AD) and Parkinson’s Disease (PD), other dementias, degenerative nerve diseases, glaucoma, stroke, multiple sclerosis, amyotrophic lateral sclerosis (ALS), Huntington’s disease, muscular dystrophies, and others. Dementias are the greatest disease burden, with Alzheimer’s disease contributing approx. 60-70% of cases1.

All neurodegenerative diseases, whatever their aetiology, converge on a single event: the death of neurons. For many of them, an inflammatory component of the pathophysiology has also been established, involving in the CNS microglia, astrocytes, the complement system and cytokines2. Inflammatory processes of the vasculature have been shown to contribute to dementia by damaging the blood-brain barrier and making it permeable for toxic or infectious agents3-6. Thus, therapeutic approaches to neurodegeneration should ideally be based on cytoprotection; an anti-inflammatory component could provide added benefits and would be essential in situations with a pronounced inflammatory component such as traumatic injuries or diseases involving tissue necrosis (outlined below).

Cell death is an important biological event with key roles in many biological processes such as embryogenesis or immunity; many diverse pathologies are caused by either too much or too little cell death (neurodegeneration and autoimmunity; cancer). The mechanisms by which cells die can broadly be categorised into active (the cell commits “suicide”) or passive (as a result of external damage). The best studied form of active (programmed) cell death involves the activation of caspases and is called apoptosis; however, there are a number of caspase-independent mechanisms of programmed cell death, such as necroptosis, pyroptosis, or autophagy (reviewed by Tait7). Whether a cell dies by active or passive mechanisms has profound consequences. Various molecules inside cells possess strong pro-inflammatory properties if released into the blood stream. The most abundant cyclosporin-binding protein, cyclophilin A belongs to this class8. They serve as danger signals to activate neighbouring macrophages and dendritic cells through TLR signalling and other mechanisms and have been termed “danger-associated molecular patterns” (DAMP) or alarmins9. Death mechanisms that preserve the integrity of the cell membrane such as apoptosis involve intracellular degradation of DAMPs, prevent their spilling and avoid an inflammatory response. In contrast, necrotic cells spill their contents into the bloodstream, are profoundly pro-inflammatory and can in severe situations cause the systemic inflammatory response syndrome (SIRS), a serious condition related to sepsis10, although independent of infection. Thus, depending on the death pathway, cell death can be accompanied by inflammation (as exemplified in ischaemia and reperfusion injury or severe acute pancreatitis). A large body of evidence points to a central role of the mitochondrial permeability transition pore (MPTP) in neurodegenerative and ischaemic cell death. The MPTP is a channel in the inner mitochondrial membrane that is closed under normal conditions but opened in response to stimuli including oxidative stress, Ca2+ overload or adenine nucleotide depletion. The open pore allows free passage of compounds with a molecular weight of <1500 Da across the inner mitochondrial membrane. These conditions cause a collapse of the mitochondrial protein gradient and the membrane potential and result ultimately in cellular energy depletion. It was first shown by Crompton that MPTP opening could be prevented by cyclosporin11. The existence of a mitochondrial prolyl isomerase was first shown and later identified as a novel cyclophilin (cyclosporin-binding protein) unique to mitochondria by the group of Halestrap12, 13. This protein is now known as cyclophilin D, serves as a modulator of the sensitivity of the MPTP towards opening stimuli and has become an attractive target for pharmacological approaches of neuroprotection.

The MPTP can respond in different ways to opening stimuli: Moderate stimuli of short duration cause apoptosis but strong signals of longer duration lead to necrotic cell death14. In the absence of cyclophilin D, the pore is less sensitive towards the opening stimuli. Pharmacological inhibition of cyclophilin D therefore represents a promising cyto- and neuroprotective principle, further supported by data showing that mice lacking cyclophilin D-/- develop normally but are protected from ischaemic renal injury15 and that cypD gene ablation also prevents muscle apoptosis in collagen VI myopathic mice16.  Many other preclinical studies have been published corroborating this assumption, using models of Alzheimer’s17 or Parkinson’s disease18, traumatic brain injury19 or, most recently, of multiple sclerosis20. Clinical studies have mostly used the widely used immunosuppressant cyclosporin, which is a potent inhibitor of cyclophilin D and other cyclophilins. Clinical studies with cyclosporin include collagen VI myopathies21, 22, stroke23 and Leber’s Hereditary Optical Neuropathy (LHON) 24. Unfortunately, cyclosporin is not the ideal tool to explore the clinical potential of cyclophilin inhibition. The compound is highly protein-bound, does not penetrate deep into tissues, more than 60% of the administered dose end up being sequestered in erythrocytes unavailable for pharmacodynamic activity on target sites, and it does not cross the blood-brain barrier to a meaningful amount25. Its immunosuppressive activity and well-known toxicities are dose-limiting and negative results in human studies must be judged bearing these factors in mind.

The evidence presented here provides a strong case for targeting mitochondrial cyclophilin D to prevent progression of chronic neurodegenerative diseases. For the long-term treatment of such diseases a compound would be required that (1) penetrates the blood-brain barrier, and (2) has good selectivity for cyclophilin D over other subtypes. Such a compound does not exist today, but ongoing efforts in several laboratories and the skill of medicinal chemists justify optimism towards this goal.

One response to “Neurodegenerative diseases: The potential of cyclophilin inhibition”