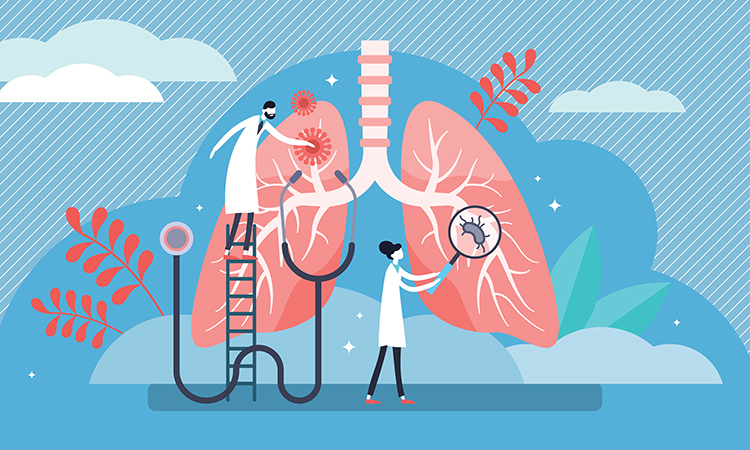 Researchers at the University of Texas MD Anderson Cancer Center, US, have developed a first-of-its-kind spatial atlas of early-stage lung cancer and surrounding normal lung tissue at single-cell resolution. According to the team, the new atlas provides a valuable resource for studying tumour development and identifying new therapeutic targets.

“This high-resolution spatial mapping generated a much more complete picture of lung cancer than was previously available and we believe this will be a valuable resource to the research community,” said co-senior author Dr Linghua Wang. “We now have a greater understanding of the tremendous heterogeneity of diverse cell populations within the tumour immune microenvironment and of the importance of tumour-microenvironment interactions in regulating cancer progression.”

Through this work, the research team sought to gain a better understanding of how and why lung tumours develop in a particular region of the lung versus another. This understanding offers opportunities not only to better treat early-stage cancers, but also to improve screening and prevention strategies.

The findings revealed a heterogeneous lung cancer ecosystem, with extensive interactions between cancer cells and the surrounding microenvironment that regulate early cancer development. The analysis also revealed significant heterogeneity within a given tumour and across multiple tumours. Furthermore, while normal lung epithelial cells were distinct from the tumour cells, those closer shared more similarities with the tumour cells compared to distant normal tissue. These signatures also were evident in precancerous lesions compared to normal lung tissue, suggesting the data may be useful in identifying markers for early detection or prevention.

Similar trends were observed when looking at immune cells. With increasing proximity to the tumour, the researchers observed a shift in immune cell composition and signals toward a pro-tumour, immunosuppressive environment. Interestingly, specific immune populations were present in samples from smokers that were absent in those from non-smokers.

By studying the crosstalk between the tumour and surrounding immune cells, the researchers identified and validated CD24, an immune checkpoint protein, as a new immunotherapy target for lung cancer treatment. Examining interactions between the tumour and immune microenvironment, the researchers discovered that CD24, highly expressed in lung cancer cells, is a pivotal point of interaction between cancer cells and immune cells.

“Our study is the first to look at this through spatial mapping of multi-region normal tissues and the tumour itself at the single-cell level,” said co-senior author Dr Humam Kadara. “This work provides new insights into how lung adenocarcinomas evolve from a particular region in the lung and already has pointed us to a promising new therapeutic target in CD24.”

Going forward, the researchers will continue experiments to identify the best strategy for targeting CD24 therapeutically, with the goal of performing future clinical studies to evaluate new treatment strategies for patients with early-stage lung cancer.

The research team continues to analyse additional patient samples to expand the data resource, taking a deeper dive to understand how immune cell populations change dynamically during early lung cancer development. They also plan to look more closely at how different cancer drivers, such as smoking or genetic mutations, influence the tumour immune microenvironment and its role in the evolution of early-stage lung cancer.

The study was published in Cancer Discovery.