A new magnetically driven rotary microfilter has been developed to filter particles inside a lab-on-a-chip microfluidic device. 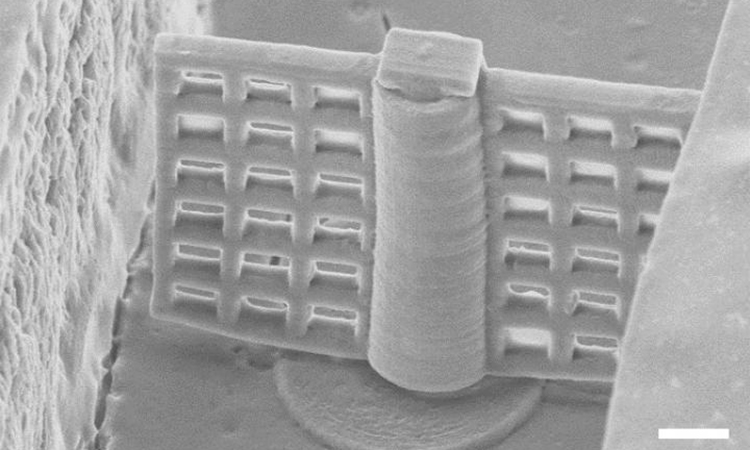 Researchers fabricated tiny magnetically driven rotating filters for use in microfluidic channels. The filters are just 70 microns wide and 60 microns tall with square openings that measure 6.5 microns on each side. Scale bar: 10 microns [credit: Dong Wu, University of Science and Technology of China].

Researchers have fabricated a magnetically driven rotary microfilter that can be used to filter particles inside a lab-on-a-chip microfluidic device. From the University of Science and Technology of China, Hefei University of Technology, also China, and RIKEN Center for Advanced Photonics, Japan, the team made the tiny turning filter by creating a magnetic material that could be used with a very precise three-dimensional (3D) printing technique known as two-photon polymerisation.

According to the researchers, microfluidic devices, also known as lab-on-a-chip devices, can be used to perform multiple laboratory functions inside a chip that usually measures a few square centimetres or less. These devices may be useful for a variety of applications such as screening molecules for therapeutic potential or performing blood tests that detect disease.

“By changing the direction of external magnetic field, the microfilter we made can be remotely manipulated on demand to either filter certain-sized particles or to allow them all to pass,” said Dong Wu, one of the researchers from the University of Science and Technology of China. “This functionality could be used for many types of chemical and biological studies performed in lab-on-a-chip devices and importantly, makes it possible for the chips to be reused.”

The team showed that their new rotary microfilter filters can sort particles in a microfluidic device with high performance.

“This filter could eventually be used to sort cells of different sizes for applications such as isolating circulating tumour cells for analysis or detecting abnormally large cells that may indicate disease,” said Chaowei Wang from the University of Science and Technology of China. “With further development it might even be possible to use it in devices placed inside the body for cancer detection.”

Filters with micrometre-sized holes are often used in microfluidic chips as a way to sort particles or cells based on sizes of the holes. However, because the number and shape of holes in the filter cannot be dynamically changed, available devices lack the flexibility to sort different types of particles or cells on demand. To expand the usefulness of microfluidic devices, the researchers developed a filter that can freely switch between modes such as selective filtering and passing.

They created the new filter using two-photon polymerisation, which uses a focused femtosecond laser beam to polymerise a liquid light-sensitive material known as photoresist. Due to two-photon absorption, the polymerisation can be done in a very precise manner, enabling fabrication of complex structures on the micron scale.

To make the microfilter, the researchers synthesised magnetic nanoparticles and mixed them with the photoresist. Fabricating the rotary microfilter required them to optimise the laser power density, number of pulses and scanning intervals used for polymerisation. After testing its magnetically-driven properties on a glass slide, they integrated the microfilter into a microfluidic device.

The researchers verified the filtering performance of the filter using polystyrene particles with diameters of 8.0 and 2.5 microns that were mixed in an alcohol solution.

“It was clear that particles smaller than the pore size easily passed through microfilter while bigger ones were filtered out,” said Chenchu Zhang, from University of Science and Technology of China. “When in passing mode, any larger particles captured by the filter were washed away with the fluid, which prevents filter clogging and allows reuse of the microfilter.”

The findings are published in Optics Letters.