Under the microscope: Collaborating in target discovery

Vernalis Research is based at Granta Park in Cambridge, UK and specialises in the development and application of fragment- and structure-based drug discovery methods. Nikki Withers met with Vernalis’ Research Director, James Murray, to discuss the company’s innovative approach to target discovery and how they sustain symbiotic collaborations to progress important research.

Vernalis has a long history of working in those key areas necessary to deliver a final drug candidate. From characterising new protein targets, developing assays, identifying and validating hits from fragments and other sources, evolving these into lead compounds guided by protein structure, and optimising these further to deliver drug candidates; their techniques and focus have evolved over time. “We started off looking at RNA – our work was based around fragment- and structure-based drug discovery, which, back then, was quite unusual,” explains James Murray, Research Director at Vernalis.

At this time, the team used NMR spectroscopy and considered themselves primarily a ‘structural company’, which has remained their base expertise. “In 2000, we introduced X-ray crystallography, and this is when I arrived as the first crystallographer,” says Murray. “We were working on the structure-based discovery of inhibitors of the 30S ribosome and we made some interesting breakthroughs. Our research moved on to protein targets and our first project was Hsp-90 (heat shock protein-90). Our Hsp-90 pre-clinical candidate partnered with Novartis and was very successful in Phase I. However, it ran into some issues in Phase II in terms of net effectiveness.”

Vernalis has merged with various companies over the years, retaining staff and therefore expertise along the way. “We started off as RiboTargets and have since undergone a series of mergers. The ‘old’ Vernalis was a GPCR-based company – a merger of a company called Cerebrus and Vanguard Medica. We also merged with Ionix Pharmaceuticals, which were an ion channel company based in Cambridge. At the end of last year, we were acquired by Ligand Pharmaceuticals, and we now operate as a subsidiary of Ligand.”

The team at Vernalis pride themselves on their continuous innovation and ideas-driven culture. “While we’ve worked quite a lot in classically druggable targets, like kinases and ATPases, probably our newest and most advanced work relates to protein-protein reactions,” explains Murray. “Using traditional methods, like FP (Fluorescent Polarisation), you will naturally run into a limit of what potency can be measured. Because we understand protein structure, we can construct assays that are far superior to traditional assays.

“Recently, we’ve constructed various static quenching assays and time-resolved fluorescence energy transfer (TR-FRET) assays. Rather than buying a kit and relying on someone else’s technology, which might not be quite appropriate, we can engineer where we want to put dyes and we’ve even created our own dye sets. This has enabled us to build high-throughput assays that can reliably measure sub-picomolar affinities in a two or three-hour period.”

Earlier examples of innovation at Vernalis include the adoption of fragment-based drug discovery methods for targeting RNA and later proteins. “We engineered NMR methods that resulted in high success rates in terms of identifying competitive inhibitors,” says Murray, adding that this was where a lot of their hits came from. “The method we use allows us to observe the protein, ligand and its binding in the same tube simultaneously.”

Vernalis is involved in various research collaborations with major pharmaceutical and biotechnology companies and academic partners, ranging from early-stage research establishing target tractability through to late-stage lead optimisation programmes. “A lot of clients come to us with a new target they’re interested in and we’ll discuss what the options are. Typically, we’ll initiate a fragment screen of some description, solve protein expression problems and try crystallography and NMR,” says Murray.

“We work very closely with our partners. Usually, they bring one area of expertise to the table while we bring something else. Some of our collaborations relate to identifying initial hits on difficult targets, for example. Rather than having a narrow focal point, we pride ourselves on our mutual co-operation with collaborators to ensure that the combined strengths of the partners are most effectively deployed to deliver drug candidates.” The team also invests in data-sharing tools. “We try to have a fairly open approach to science,” says Murray. “Data sharing is normally weekly and is curated in a way that suits our collaborators in terms of how they like to absorb their information; some like to receive the raw data, while some prefer a reduced dataset, often with automated reporting where you’re comparing historical data. We have also written software to help people interpret structures, which we share freely.”

Within the company, Murray explains that there are “layers of expertise”, adding that everyone is mindful of each other’s skills and people are kept out of silos. “This makes sharing with our collaborators much easier.”

At Vernalis, staff retention is high with around 50 percent of the team having worked together for at least 15 years. “Our overriding philosophy is, if you treat people like adults they behave like adults. We all make mistakes, so we encourage people to be open about them, which breeds a very trusting culture. We share information about projects and give everyone an opportunity to shine. We like to share our successes – if we reach a milestone moment in a project, we all enjoy that ‘champagne moment’.”

Murray anticipates that new investment opportunities will enable the team to make some exciting developments in the coming years. “The main reason we do this work is to make a difference to someone’s life – the point is to make drugs that help improve quality of life and longevity. I’m looking forward to novel developments reaching the clinic.”

Dr James Murray has worked at Vernalis Research for 18 years, having previously held research roles in the USA and Australia. His time with the company has focused on optimising its drug discovery process, primarily through innovation in the use of biochemical and biophysical tools, with a particular emphasis on the hit-to-lead stage. He has published over 50 peer-reviewed papers and been involved with 13 granted patents and 22 active patent applications. 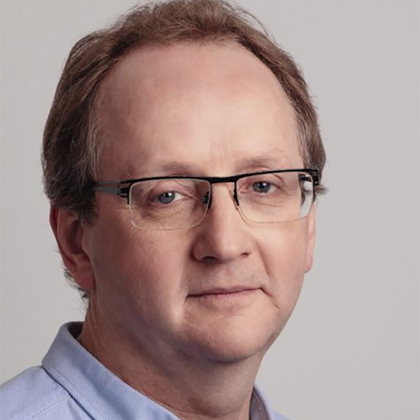