Five of the latest developments in 3D bioprinting

Drug Target Review brings you five of the most recent developments in three-dimensional (3D) bioprinting. 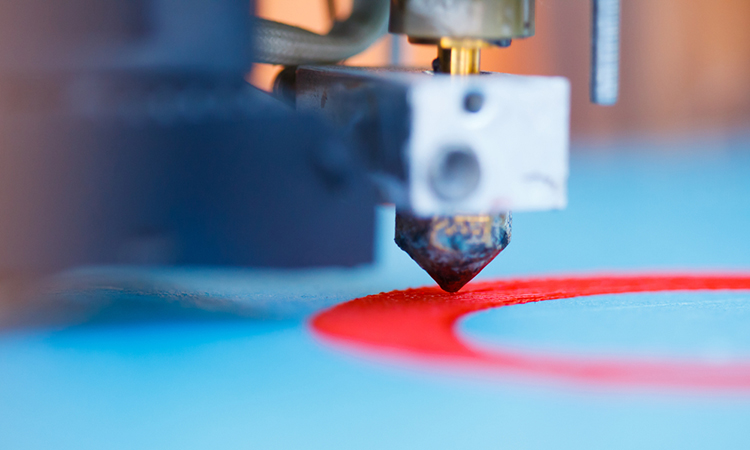 Three-dimensional (3D) bioprinting, or additive manufacturing, makes it possible to print complex, porous and personalised structures that could enable healthcare professional to one day print tissue for a patient’s particular requirements.

Here, Drug Target Review has rounded up five of the latest news and stories regarding 3D bioprinting.

A team of researchers has discovered a way to use 3D bioprinting technology to create custom-shaped cartilage for use in surgical procedures. The work was conducted at the University of Alberta, Canada, and published in FASEB.

According to the researchers, 40 percent of patients with non-melanoma skin cancer will have lesions on their noses, with many requiring surgery to remove them. As part of the procedure, many patients may have cartilage removed, leaving facial disfiguration. Traditionally, surgeons would take cartilage from one of the patient’s ribs and reshape it to fit the needed size and shape for reconstructive surgery. However, when the cartilage adapts to its new environment, it goes through a period of remodelling where it warps similar to the curvature of the rib. Furthermore, the rib compartment is opened which could lead to a collapsed lung. 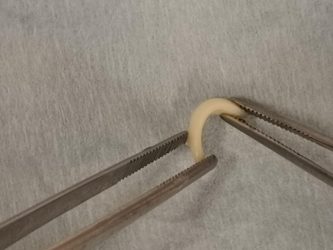 3D printed cartilage is shaped into a curve suitable for use in surgery to rebuild a nose. The technology could eventually replace the traditional method of taking cartilage from the patient’s rib, a procedure that comes with complications [credit: University of Alberta].

The researchers used a specially designed hydrogel that could be mixed with cells harvested from a patient and is 92 percent water. The cartilage is printed in a specific shape captured through 3D imaging. Over a matter of weeks, the material is cultured in a lab to become functional cartilage.

The scientists say their work is an example of both precision medicine and regenerative medicine. Lab-grown cartilage printed specifically for the patient can remove the risk of lung collapse, infection in the lungs and severe scarring at the site of a patient’s ribs.

The team is continuing its research and is now testing whether the lab-grown cartilage retains its properties after transplantation in animal models.

Researchers have described a new approach for directing cell orientation within deposited hydrogel fibres via a method called multicompartmental bioprinting, in a study published in Applied Physics Reviews.

According to the team, from the University of Connecticut, US, bioengineered cellular scaffolds for tissue engineering applications must be highly ordered to perform like natural tissue.

The team used static mixing to fabricate striated hydrogel fibres formed from packed microfilaments of different hydrogels. In this structure, some compartments provide a favourable environment for cell proliferation, while others act as morphological cues directing cell alignment. The millimetre-scale printed fibre with the microscale topology was able to rapidly organise the cells toward faster maturation of the engineered tissue. 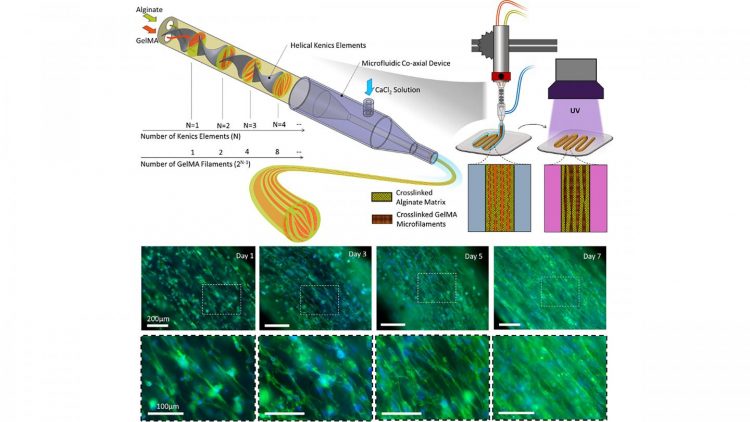 For their technique, the team combined two principles. The formation of topographies was based on the design of fluid within nozzles and controlled mixing of two separate precursors. After crosslinking, the interfaces of the two materials serve as 3D surfaces to provide topographical cues to cells encapsulated within the cell permissive compartment.

The first principle is extrusion-based bioprinting, where the printed fibres are typically several hundreds of micrometres in size with randomly oriented cells. Providing topographical cues to the cells within these fibres to direct their organisation is thus highly desirable.

Conventional extrusion bioprinting was the second principle, however this also suffers from high shear stress applied to the cells during the extrusion of fine filaments. The team emphasise that the fine scale features of the proposed technique are passive and do not compromise other parameters of the printing process.

This bioprinting technique enables the production of tissue structures’ morphological features to control cellular behaviour and form biomimetic structures. The team say that it shows great potential for engineering fibrillar tissues such as skeletal muscles, tendons and ligaments.

In Applied Physics Reviews, researchers from Sungkyunkwan University, South Korea, report a solution to address the challenge of fabrication of a biomimetic scaffold. The team designed a microchannel scaffold made of a collagen and hydroxyapitite combination, with each strut consisting of micrometre-scaled microchannels. The microchannels have induced growth of blood vessels in a mouse model.

According to the team, while autogenous bone grafts have long been considered the reference standard for spinal fusion, painful pseudoarthrosis remains a leading cause of poor clinical outcomes. Many researchers have consequently focused on trying to create a biomimetic scaffold that induces vascularisation to enable bone tissue regeneration and spinal fusion.

The researchers printed immiscible polymer blends that act as a double negative template in order to fabricate the biomimetic collagen/hydroxyapatite hierarchical scaffold. They followed that by one-way shape morphing (4D printing) and coating processes. 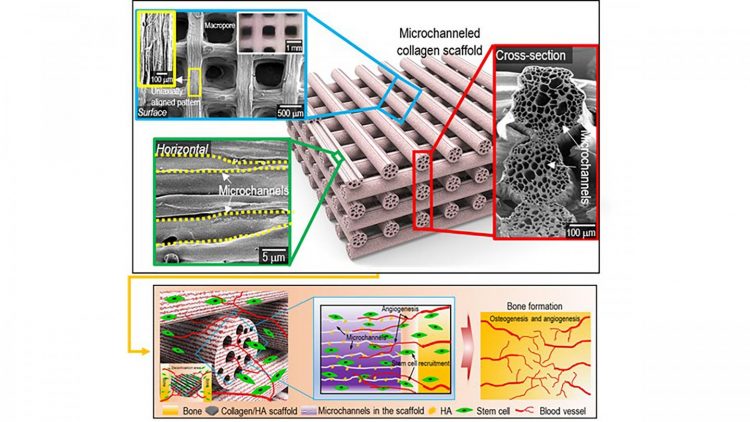 Collagen is known as a hydrophilic material and numerous in vivo studies have suggested it possesses excellent cellular activities. In the case of the microchanneled collagen/hydroxyapatite scaffold, the researchers noted significantly higher water-absorbing capability, compared to a conventional collagen scaffold, as a result of the capillary pressure supplied by the microchannels. Consequently, the in vivo studies have suggested excellent infiltration of cells into microchannels.

4. 3D bioprinting an in vitro model of diabetic skin

A team from Pohang University of Science & Technology (POSTECH) has succeeded in creating artificial skin that reproduces the skin diseases of diabetic patients.

The researchers produced the in vitro diseased skin model that displays the pathophysiological hallmarks of type 2 diabetes based on a 3D cell printing system. Their findings were published in Biomaterials. 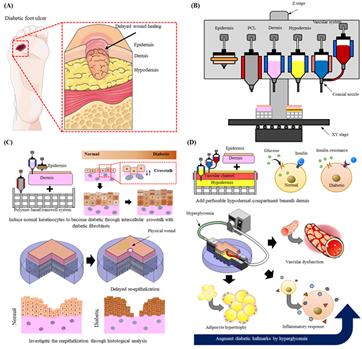 Inspired by the interaction between the epidermis and skin cells found in real skin, the team hypothesised that when normal keratinocytes interact with the dermal layer made of diabetic fibroblasts, they will differentiate into diabetic epidermis. To prove this, diabetic artificial skin with skin wounds based on 3D printing technique was fabricated using each cell.

In this diabetic artificial skin, slow re-epithelialisation, a typical feature of diabetic skin, was observed. In addition, when the diabetic fat tissue layer containing blood vessels was added, insulin resistance, adipocyte hypertrophy, pro-inflammatory response and vascular dysfunction, which are commonly observed in diabetes, were confirmed.

The researchers anticipate that this new model will be a way to replace animal models that have been conventionally used to observe skin diseases.

Researchers have developed a unique scaffolding material for engineered tissues that can be fine-tuned to grow natural tissue. The method was created at Washington State University School of Mechanical and Materials Engineering, US. 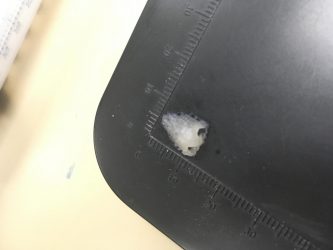 A 3D-printed scaffold of a nose [credit: WSU].

Reported in Bioprinting, the team say that the success of this method in manufacturing functional tissues relies heavily on how well the fabricated structures mimic the native tissues, which allows cells to differentiate properly. For instance, a skin cell will grow on a scaffold that feels like skin while a muscle cell will only develop on a scaffold that feels like muscle.

The way researchers have traditionally varied their scaffolds was to simply remove trusses to make them softer or stiffer – a method that is too simple to address all the needed complexity in tissue engineering.

In the new study, the researchers developed a new bioink material that allows for customising properties to closer approach what cells might need. The ingredients for their scaffold include gelatin, gum Arabic and sodium alginate.

The team say that this provides the capability to tune the properties without changing the scaffold design.