Although Cordyceps mushrooms are challenging to cultivate, researchers have shown that they can be grown on edible insects to exploit their strong therapeutic potential. 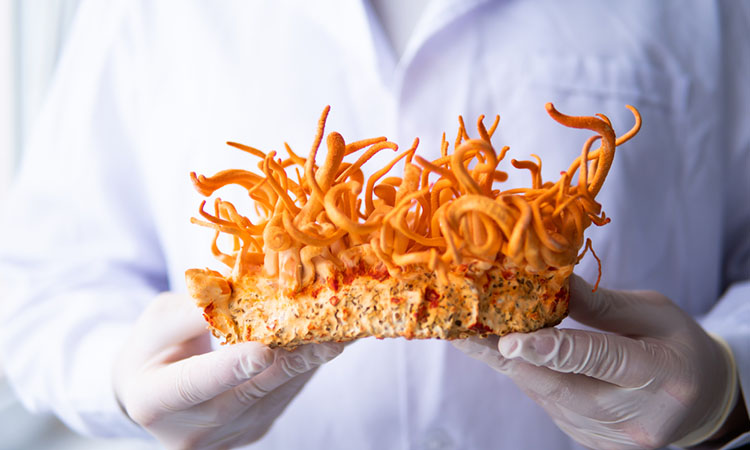 A team of researchers from Chungbuk National University, South Korea, have found a way to grow Cordyceps fungi in a controlled setting. They can now do this without losing the potency of the bioactive compound and potentially therapeutic cordycepin, found within the mushroom.

In their paper, published in Frontiers in Microbiology, the researchers explain that Cordyceps is best known for its spores that infect insects and kill them, growing into fully-fledged fruiting bodies that sprout from the insects’ flesh.

However, Cordyceps also has significant medicinal potential, containing cordycepin, which could potentially be developed into powerful new antiviral medications and cancer drugs.

Usually, Cordyceps is cultivated in the lab on grains such as brown rice. However, scientists noticed that the levels of cordycepin were very low when it was collected on these grains.

They suspected that the protein content of the grains simply was not high enough to feed the Cordyceps.

Given the high therapeutic potential of cordycepin, the researchers were keen to find a way to grow healthy, strong mushrooms. They considered edible insects as an alternative growth medium. However, different insects offer different nutrients, so they investigated which commercially available edible insects provided would be most suitable.

The maximum growth did not necessarily correlate with the high levels of cordycepin, the team found. Although they did not grow as large, Cordyceps grown on Japanese rhinoceros beetles produced the highest levels of cordycepin – 34 times more than the levels produced on silkworm pupae, the poorest performers.

The investigation showed that the key to cordycepin production was the fat content of the insect, not the protein.

Specifically, high levels of oleic acid may be necessary for cordycepin synthesis. Adding oleic acid to a low-performing insect food improved the production of cordycepin in Cordyceps grown on it by 50 percent.

As the therapeutic potential of the mushrooms is complicated by the difficulty of producing cordycepin in the laboratory, these results offer hope for researchers seeking to harness their power in drug discovery to find the medicines of the future.

“Our research convincingly shows that a potential strategy for boosting cordycepin production in the growth of Cordyceps would be to use insects with high oleic acid content,” said Professor Mi Kyeong Lee, lead researcher on the study.