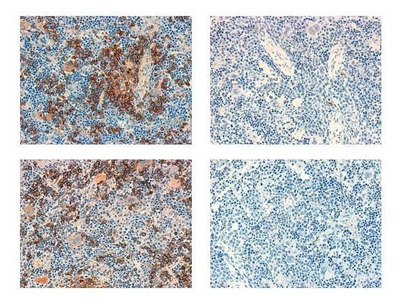 Mouse spleens that were infiltrated by TAL1-positive T-ALL cells taken from human patients, with leukaemia cells shown in brown. Images on the right are from mice treated with GSK-J4, while the mice on the left were not treated with the compound. CREDIT: Aissa Benyoucef

Researchers have found the Achilles’ heel of one of the most aggressive forms of leukaemia that affects both children and adults.

They have also identified a possible new treatment that exploits this fatal weakness.

Their study focuses on a type of acute lymphoblastic leukaemia (ALL) that involves a gene called TAL-1. Dr Marjorie Brand, a senior scientist at The Ottawa Hospital and professor at the University of Ottawa, and her team discovered that a compound called GSK-J4 can kill this form of cancer.

By transplanting cancer cells from human patients into normal mice, the researchers showed that the compound can kill the leukaemia quickly, efficiently, and with no short-term side effects. GSK-J4 was created by the pharmaceutical industry for research purposes, and has never been used as a cancer therapy.

“It’s very exciting because this is the first time anyone has found a potential personalized treatment for this aggressive disease,” said Dr Brand. “Unlike current therapies, ours targets the offending gene without harming the rest of the body.”

Today the treatment is the same for all forms of T-ALL: chemotherapy with side-effects including risk of secondary cancers later in life and stunted growth in children. If the cancer returns after treatment, patients usually die soon after.

“With the current treatments, you get a 90% cure rate in some of the T-ALL subtypes,” said Dr Aissa Benyoucef, a postdoctoral Fellow at The Ottawa Hospital and the University of Ottawa. “But in the TAL-1 subtype that we’re studying, you get only a 50% cure rate. It’s very aggressive.”

Dr Marjorie Brand and her team decided the best way to find a better treatment for the TAL-1 subtype was to investigate exactly how it works at a molecular level.

An 80% decrease in the number of cancer cells

The team looked at the TAL-1 gene, which in certain circumstances can transform the cells that will become T-cells into cancer cells. TAL-1 does this by activating genes that make white blood cells grow uncontrollably. Eventually these cancerous cells spread throughout the blood and body, causing leukaemia.

The research team discovered that TAL-1 has a weak spot: It needs a partner in crime, an enzyme called UTX, to trigger cancer production. So when Dr Brand’s team used a compound called GSK-J4 to turn off UTX, it completely stopped the growth of TAL-1 type cancer cells. This treatment specifically worked only for TAL-1 subtype, and not any other types of T-ALL.

The team tested these findings in mouse models injected with cells from human TAL-1 type leukaemia. After treating the mice with GSK-J4 over three weeks, the researchers found the number of cancer cells in their bone marrow decreased by 80%. In addition, the compound left non-cancer cells unharmed, and had no short-term effects on other organs of the body.

“While our study is a proof of concept, these promising results might one day lead to a similar targeted treatment for humans,” said Dr Carmen Palii, a research associate in Dr Brand’s lab.

In the meantime, the research team is conducting preclinical studies in mouse models, looking at the effects of increased doses as well as long-term side effects of GSK-J4.