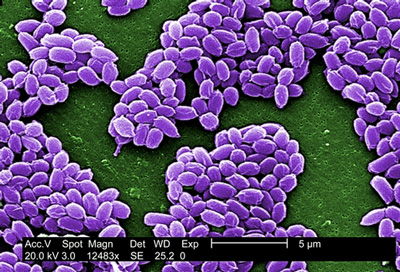 Scientists from the US National Institutes of Health (NIH) have described how combining engineered anthrax toxin proteins and existing chemotherapy drugs could potentially yield a therapy to reduce or eliminate cancerous tumours.

The bacterium Bacillus anthracis, which causes the deadly anthrax disease, produces a toxin made of three proteins that individually are non-toxic. Because the proteins can be engineered to suppress tumour growth they have emerged as a potential cancer therapy. Until now, however, scientists have been unsure how the toxin proteins control tumour growth.

In this study, NIH scientists used mouse models to show that anthrax toxin proteins work by specifically targeting the cells that line the inner walls of the blood vessels feeding the tumour. The proteins, which reach these cells through a surface receptor called CMG2, prevent the cells from reproducing. Because the toxin does not target the tumour cells themselves but rather the host-derived blood vessel cells, the strategy could be efficacious for a wide range of tumour types, the NIH team notes.

Unfortunately, the immune system produces antibodies in response to the anthrax toxin proteins, making additional courses of treatment ineffective. To circumvent this problem, the investigators examined in mice whether a regimen of the chemotherapy drugs pentostatin and cyclophosphamide (PC) could block production of the antibodies that neutralise the anthrax toxin proteins.