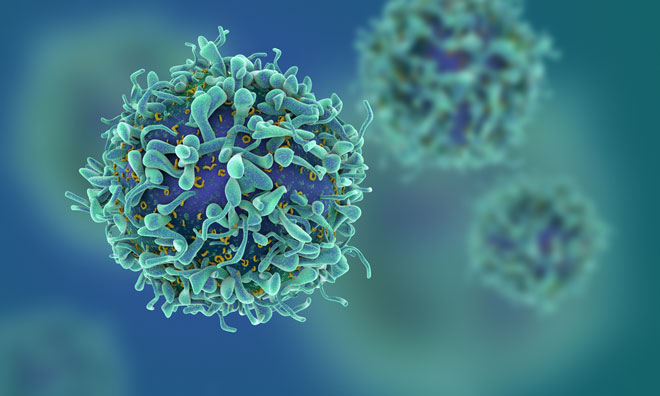 Researchers at Johannes Gutenberg University Mainz have identified that it is possible to influence the development and functioning of regulatory T cells, also known as Tregs, and T helper 17 (TH17) cells by means of inhibition of the protein kinase CK2 that is involved in the development of autoimmune diseases, a new insight that could lead to the creation of innovative treatments for disorders such as multiple sclerosis (MS).

It would seem that many of the devastating effects of autoimmune disorders are attributable to TH17 cells. Among other factors, the relative levels of these two types of cells determine whether or not an autoimmune disorder develops.

For this reason, the researchers aimed to create an imbalance in favour of the Tregs. They were able to achieve this by inhibiting the development of the auto-aggressive TH17 cells through a blockade of CK2 and the simultaneous promotion of the synthesis of Tregs. The efficacy of this approach has already been impressively confirmed in pre-clinical models.

The human immune system is extremely efficient in recognising intruders that could be potentially damaging to health. A sub-group of white blood cells, the so-called T cells, identify invading pathogens on the basis of their proteins and normally orchestrate an appropriate qualitative and quantitative defensive immune reaction. This neutralises the exogenous invaders in a targeted manner and eliminates them. In rare cases, this type of defensive reaction may culminate in an exaggerated immune response. It is to prevent exactly such excessive immune reactions that regulatory T-cells, the so-called Tregs, have evolved over time.

In healthy individuals, these Tregs serve to maintain immunological tolerance. They protect harmless antigens such as foreign proteins in food that might otherwise trigger an endogenous defensive reaction, as well as the body’s own structures in the case of inappropriately activated immune responses. They thus also prevent the development of allergies and autoimmune disorders, including multiple sclerosis (MS).

A sub-population of T helper cells, the so called Interleukin-(IL)17 producing TH17 cells, plays a major role in the development of MS. In healthy individuals, these TH17 cells are responsible for the control of infecting bacteria and fungi. However, TH17 cells also have a potentially negative, auto-aggressive effect in that they can be responsible for the destructive processes that occur in the presence of inflammations and also in many autoimmune conditions.

The researchers at the Mainz University Medical Center now discovered that not only the ratio of Tregs to TH17 cells decisively determines whether or not an autoimmune disorder develops but also, and more importantly, that pharmacological inhibition of CK2 tips the balance of the two cell types towards Tregs.

Protein kinases are the second largest family of proteins present in higher cells. They modify other proteins and thus change the biological properties of these proteins.

The researchers were able to show that inhibition of the protein kinase CK2 results in a blockade of exactly those signal pathways required by TH17 cells in order to evolve.

On a molecular level, the inhibition of the protein kinase CK2 leads to inhibition of the signal pathways mediated by the cytokines interleukin-6, interleukin-21, and interleukin-23 as well as those that regulate gene expression through the transcription factor STAT3. This leads to the expression of another transcription factor called forkhead-box protein P3 (FOXP3), which in its turn controls the development and functioning of Tregs by means of genetic regulation.

Thus, the auto-aggressive TH17 cells that are actually involved in the generation of autoimmune diseases are ‘deprogrammed’ in cells which protect endogenous structures, hence preventing the onset of these disorders.

Funding for the research

The study was conducted as part of the interdisciplinary Collaborative Research Center / Transregio 128 which is funded by the German Research Foundation (DFG) and coordinated in Mainz by Professor Frauke Zipp, Director of the Department of Neurology at the Mainz University Medical Center.

Multiple sclerosis is the most common chronic inflammatory disease of the central nervous system. In Germany alone, more than 200,000 people are affected by this autoimmune disorder. In MS, the protective covering of the nerve fibres in the brain and spinal cord (the myelin layer) is damaged so that nerve stimuli can no longer be transmitted. The nerve fibres themselves are also damaged. The consequences can range from problems with walking, numbness to impaired vision.