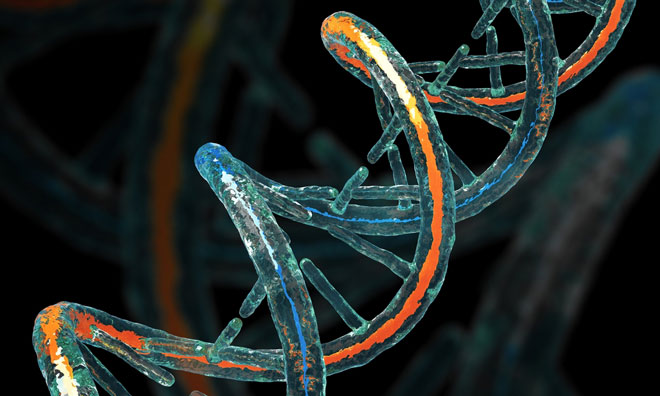 Researchers from the Wellcome Trust Sanger Institute and their collaborators have adapted a CRISPR gene editing technique and used it to find new therapeutic targets for acute myeloid leukaemia (AML). The team identified a large number of genes that could serve as potential targets for anti-AML treatments and describe how inhibition of one of these genes, KAT2A, destroys AML cells without harming non-leukemic blood cells.

AML is an aggressive cancer. The cancer cells crowd out healthy cells in the bone marrow. They multiply quickly and interfere with the bone marrow’s ability to make normal blood cells, leading to life-threatening infections and bleeding. Mainstream AML treatments haven’t changed for decades and fewer than one in three people survive the cancer.

To identify new ways to treat AML, the team used CRISPR-Cas9 gene-editing technology to screen cancer cells for vulnerable points. This technology can be used to disrupt and destroy targeted genes in the genomes of cells. To achieve their goals, the team refined a CRISPR-Cas9 technique to efficiently disrupt all genes in the leukaemia cell genome individually. This allowed them to identify those genes whose disruption was detrimental to the growth and survival of AML cells.

Dr Kosuke Yusa, joint project leader from the Sanger Institute, said, “Previous studies showed proof of principle, but this is one of the first systematic attempts to identify the genetic vulnerabilities of AML. We have improved and applied CRISPR-Cas 9 technology to look at what actually kills cells. CRISPR is becoming a powerful technique in cancer research because it overcomes some of the limitations of earlier tools.”

The human genome contains around 20,000 genes, by refining CRISPR-Cas9 technology and using it to screen the leukaemia genome the team uncovered a catalogue of approximately 500 genes that are essential for cancer cell survival, including more than 200 genes for which drugs could be designed. Whilst a handful of these genes including DOT1L, BCL2 and MEN1 are already established therapeutic targets, most of them are novel and open up many new possibilities for developing effective treatments against the disease.

The researchers chose the KAT2A gene for further research and in order to demonstrate the validity of their findings. By inhibiting KAT2A using genetic and drug-based techniques, they showed that disruption of the gene reduced the growth and survival of AML cells, but not of normal blood cells. Dr Konstantinos Tzelepis, Sanger Institute, said, “This is an exciting finding, as KAT2A inhibition worked on a number of primary AML cells with diverse genotypes. Whilst the gene needs to be studied in greater depth to understand its potential for use in the clinic, we show that targeting KAT2A destroyed AML cells in the laboratory while sparing healthy blood cells.”

The team then validated this finding, by disrupting the KAT2A gene from leukaemia cells in transgenic mice, and observing the effect on the cancer. They found that the mice lived longer when the KAT2A gene was disrupted.

Dr George Vassiliou, Haematologist at Cambridge University Hospitals NHS Trust, said, “This research has led to the identification of many potential gene targets for future AML therapy, which we are making available to other researchers to explore. Whilst KAT2A inhibition now needs to be investigated as a treatment strategy for acute myeloid leukaemia, there are many more candidates to pursue by the leukaemia research community.”