An team of scientists at the University of Nottingham has developed a technique to produce chemically functional spider silk that can be tailored to applications used in drug delivery, regenerative medicine and wound healing. 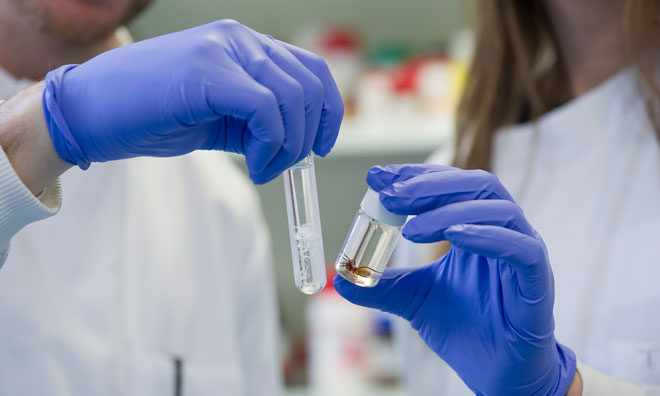 Synthetic spider silk and spider. credit: The University of Nottingham

A chance meeting between a spider expert and a chemist has led to the development of antibiotic synthetic spider silk.

The Nottingham research team has shown for the first time how ‘click-chemistry’ can be used to attach molecules, such as antibiotics or fluorescent dyes, to artificially produced spider silk synthesised by E.coli bacteria.

The chosen molecules can be ‘clicked’ into place in soluble silk protein before it has been turned into fibres, or after the fibres have been formed. This means that the process can be easily controlled and more than one type of molecule can be used to ‘decorate’ individual silk strands.

When these ‘silk’ fibres are ‘decorated’ with the antibiotic levofloxacin it is slowly released from the silk, retaining its anti-bacterial activity for at least five days.

Neil Thomas, a Professor of Medicinal and Biological Chemistry, said: “Our technique allows the rapid generation of biocompatible, mono or multi-functionalised silk structures for use in a wide range of applications. These will be particularly useful in the fields of tissue engineering and biomedicine.” Spider silk is strong, biocompatible and biodegradable. It is a protein-based material that does not appear to cause a strong immune, allergic or inflammatory reaction. With the recent development of recombinant spider silk, the race has been on to find ways of harnessing its remarkable qualities.

The Nottingham research team has shown that their technique can be used to create a biodegradable mesh which can do two jobs at once. It can replace the extra cellular matrix that our own cells generate, to accelerate growth of the new tissue. It can also be used for the slow release of antibiotics.

Professor Thomas said: “There is the possibility of using the silk in advanced dressings for the treatment of slow-healing wounds such as diabetic ulcers. Using our technique infection could be prevented over weeks or months by the controlled release of antibiotics. At the same time tissue regeneration is accelerated by silk fibres functioning as a temporary scaffold before being biodegraded.”

The medicinal properties of spider silk have been recognised for centuries.

The medicinal properties of spider silk have been recognised for centuries but not clearly understood. The Greeks and Romans treated wounded soldiers with spider webs to stop bleeding. It is said that soldiers would use a combination of honey and vinegar to clean deep wounds and then cover the whole thing with balled-up spider webs.

‘I think we could make that!’

The idea came together at a discipline bridging university ‘sandpit’ meeting five years ago. Dr Goodacre says her chance meeting at that event with Professor Thomas proved to be one of the most productive afternoons of her career.

Dr Goodacre, who heads up the SpiderLab in the School of Life Sciences, said: “I got up at that meeting and showed the audience a picture of some spider silk. I said ‘I want to understand how this silk works, and then make some.’

“At the end of the session Neil came up to me and said ‘I think my group could make that.’ He also suggested that there might be more interesting ‘tweaks’ one could make so that the silk could be ‘decorated’ with different, useful, compounds either permanently or which could be released over time due to a change in the acidity of the environment.”

The approach required the production of the silk proteins in a bacterium where an amino acid not normally found in proteins was included. This amino acid contained an azide group which is widely used in ‘click’ reactions that only occur at that position in the protein. It was an approach that no-one had used before with spider silk — but the big question was — would it work? Dr Goodacre said: “It was the start of a fascinating adventure that saw a postdoc undertake a very preliminary study to construct the synthetic silks. He was a former SpiderLab PhD student who had previously worked with our tarantulas. Thanks to his ground work we showed we could produce the silk proteins in bacteria. We were then joined by David Harvey, a new PhD student, who not only made the silk fibres, incorporating the unusual amino acid, but also decorated it and demonstrated its antibiotic activity. He has since extended those first ideas far beyond what we had thought might be possible.”

Where will we be in 5 years’ time?

Dr Goodacre said: “It is likely that this paper is just the start of a very exciting range of studies using the new spider silk material. Some of the future work will also be supported by other, neat ideas from the world of spiders and their silk, which the SpiderLab is currently trying to unravel.”

The research was funded by the Biotechnology and Biological Sciences Research Council (BBSRC).