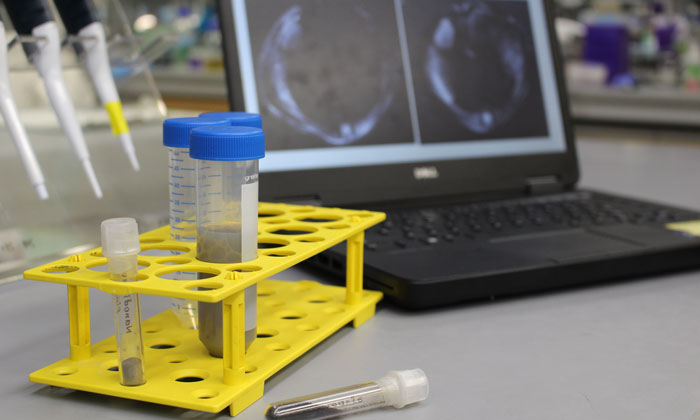 Scientists have developed a novel nanodiamond-based contrast agent – a chemical “dye” used to enhance the visibility of internal body structures in magnetic resonance imaging (MRI) – that improves visualisation of liver cancer tumours. Better and more sensitive imaging contributes towards detecting liver cancer and is crucial for planning for treatment.

A research team led by Assistant Professor Edward Chow, Principal Investigator from the Cancer Science Institute of Singapore at NUS and Department of Pharmacology at NUS Yong Loo Lin of Medicine, has developed a dual-mode contrast agent which enables clearer and more accurate images of tumours to be obtained in both T1- and T2-weighted MRI scans, and with lower dosages of contrast agent.

The novel dual-mode contrast agent, which was developed using nanodiamonds in combination with a manganese base, provides greater imaging contrast than existing clinical agents which are used to improve quality of MRIs. The team also found that liver tumours that are unable to be visualised without contrast agents become readily visible even at low dosages of the novel compound.

Contrast agents work by altering the magnetic properties of nearby water molecules, which enhances the quality of MR images. Nanodiamonds, which are carbon-based particles of two to eight nanometres in diameter, have unique chemical properties that allow them to attract water molecules. This enables them to promote proton exchange between water molecules and paramagnetic ions (i.e. contrast agents) that accumulate in tissues. As a result, T1 and T2 relaxation is enhanced, giving better quality images. This is unlike existing nanotechnology-based approaches, where nanomaterials are used to improve delivery of paramagnetic ions to specific tumour sites.

“Our experiments suggest that our dual-mode contrast agent holds great promise in improving imaging for liver cancer. We are hopeful that this advancement in nanomedicine will lead to safer and more accurate diagnosis of liver cancer. Moving forward, we plan to conduct further pre-clinical safety studies for our contrast agents, with the end goal being clinical implementation. We are also looking into using our contrast agents to improve imaging for glioma and ovarian cancer,” said Asst. Prof Chow.

The study was conducted in collaboration with the NUS Comparative Medicine Imaging Facility and the Agency for Science, Technology and Research’s Singapore Bioimaging Consortium. The findings of the study were published in the scientific journal Nanomedicine: Nanotechnology, Biology and Medicine in April 2017.