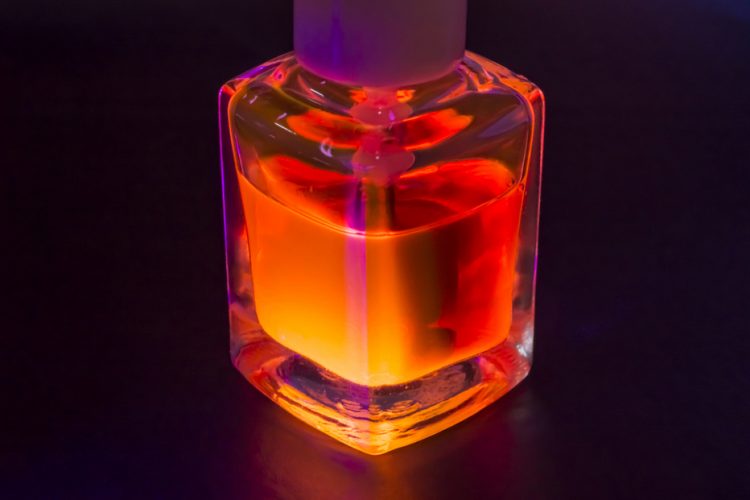 With a new technique swapping out specific chemical building blocks in rhodamines researchers have generated a fluorescent dye for biological imaging.

The work offers scientists a way to adjust the properties of existing dyes deliberately, making them bolder, brighter, and more cell-permeable.

Scientists used to create different dyes mostly by trial and error, said Dr Lavis. “Now, we’ve figured out the rules, and we can make almost any colour.”

In 2011, Dr Lavis’s team developed a new way to interfere with rhodamines’ structure. Using a reaction sparked by palladium, the researchers skipped the acid step in the reaction and constructed dyes with more complicated building blocks, than that had been used before.

This approach opened the door to a wide new world of dyes. Four years later, they revealed the Janelia Fluor dyes, fluorescent molecules up to 50 times brighter than other dyes, and more stable too.

The dyes are a tiny square-shaped appendage called an azetidine ring – a structure made possible only by Dr Lavis’s new chemistry approach.

Scientists can use a variety of strategies to get the bright dye molecules onto proteins. They then, can view the fluorescent protein, and watch it interact with other molecules – without the usual background interference.

“For us, it was a total revolution in the field of single-molecule imaging,” says molecular biologist Professor Xavier Darzacq of the University of California, Berkeley.

Before using the Janelia Fluor dyes, the fluorescent-tagged transcription factor proteins his team studied were too dim to capture in crisp images.  But the Janelia dyes are bright enough that the researchers can capture molecules in action in just a millisecond, Prof Darzacq said. Such quick snapshots have allowed his team to do lab experiments he describes as “simply unthinkable a few years ago.”

Now, Dr Lavis’s group has figured out how to fine-tune their fluorescent dyes, by tweaking rhodamines’ structure even further. Rhodamines have a basic four-ringed design with groups of atoms protruding from different parts of the rings.

His group grafted different chemicals onto rhodamines, and then analysed the new dyes’ properties. “No one had ever looked at rhodamines in this kind of systematic way before,” said lead co-author Dr Jonathan Grimm.

The dyes are synthesised in a single step with inexpensive ingredients, said Dr Lavis. That makes the dyes cheaper than commercial alternatives. The low cost has allowed his team to share their work with scientists around the world. Dr Lavis, Grimm, and colleagues have now shipped thousands of vials to hundreds of different labs.

Until about 20 years ago, scientists relied on chemical fluorescent dyes to make biological molecules visible. For glancing inside cells, staining organelles, and other imaging experiments.

Until recently, making new rhodamines wasn’t easy. Scientists still used techniques from the earliest days of chemistry, boiling chemical ingredients in sulfuric acid. This forces the molecules to link together in what’s called a condensation reaction. Mixing in different building blocks can yield new and unusual dyes. But ingredients had to be tough enough to survive the boiling acid bath – which didn’t leave a lot of options.