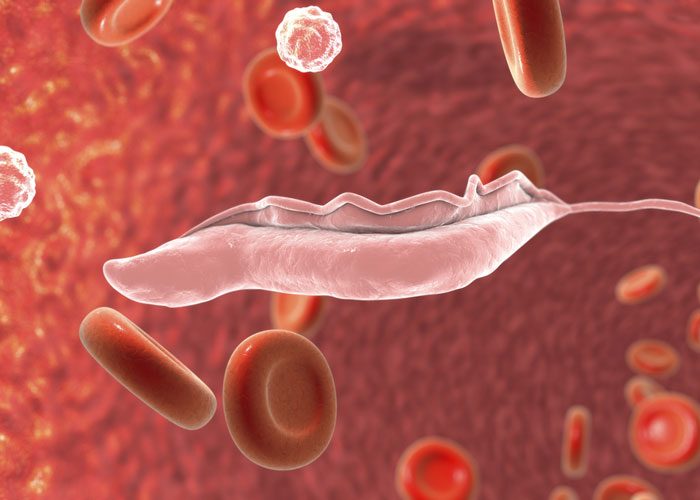 A team of researchers have discovered a new potential therapeutic target – located in the ribosome – to combat trypanosomes parasites.

Using cryo-electron microscopy, researchers at the Institut de Biologie Moléculaire et Cellulaire have analysed the structure of these parasites in details and revealed one of their potential weak points, which has remained undetected until now.

This discovery opens the path to the development of new safer therapies that are less toxic and more specific against trypanosomes, the parasites causing the Chagas disease and the African sleeping sickness.

The research team have particularly looked at the architecture of the Trypanosoma cruzi ribosome. Using cryo-electron microscopy – involving sample cryogenisation, it allows biological structures to be visualised in their native state – in combination with mass spectrometry – using the mass of each element to determine a precise protein composition – they have brought to light a protein specific to the ribosome of trypanosomes: KSRP (kinetoplastid-specific ribosomal protein). In addition to being specific to these parasites, KSPR is essential to their survival since inhibiting its activity leads to the death of the parasites. The exact role of KSRP in the protein synthesis remains unsolved.

This discovery of KSRP gives us a glimpse into possible future medical research for the development of new therapies against trypanosomes parasites. Elucidating the structure of this new protein could lead to designing molecules that can interact with and inhibit its activity in a highly specific way, without interfering with host cells. So the possibility of targeting and inhibiting KSRP in parasites will represent a safer alternative, and especially a more

Trypanosomes, more generally called kinetoplastids, are unicellular parasites responsible for numerous diseases of variable severity that can be lethal in the most severe cases. Trypanosoma brucei, Trypanosoma cruzi and Leishmania major are probably the best known and cause the African sleeping sickness, Chagas disease and various Leishmaniasis, respectively.

Unlike bacteria, these organisms are eukaryotic cells that contain a nucleus, just like human cells. The similarities, though low, between animal cells and trypanosome cells complicate some therapeutic approaches. For example, an antibiotic targeting given molecular machinery in trypanosomes such as the ribosome could harm human cells at the same time.

Until now, researchers thought that eukaryotic ribosomes had extremely similar structures from one species of eukaryotes to another, such as for instance the case of humans and trypanosomes, making them almost untouchable.

Recent technological advances made possible the visualization of the structure of the ribosomes from trypanosomes at near-atomic resolutions, thus small structural differences to the human ribosomes can now be seen and become a potential therapeutic target.