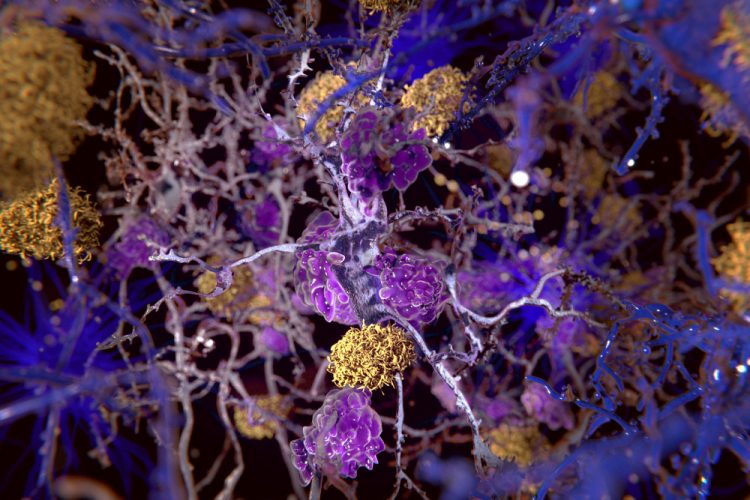 A team of researchers from the have found that gradually depleting an enzyme called BACE1 completely reverses the formation of amyloid plaques in the brains of mice with Alzheimer’s disease, thereby improving the animals’ cognitive function. The study, w raises hopes that drugs targeting this enzyme will be able to successfully treat Alzheimer’s disease in humans.

One of the earliest events in Alzheimer’s disease is an abnormal buildup of beta-amyloid peptide, which can form large, amyloid plaques in the brain and disrupt the function of neuronal synapses. Also known as beta-secretase, BACE1 helps produce beta-amyloid peptide by cleaving amyloid precursor protein (APP). Drugs that inhibit BACE1 are therefore being developed as potential Alzheimer’s disease treatments but, because BACE1 controls many important processes by cleaving proteins other than APP, these drugs could have serious side effects.

Mice completely lacking BACE1 suffer severe neurodevelopmental defects. To investigate whether inhibiting BACE1 in adults might be less harmful, Riqiang Yan and colleagues generated mice that gradually lose this enzyme as they grow older. These mice developed normally and appeared to remain perfectly healthy over time.

The researchers then bred these rodents with mice that start to develop amyloid plaques and Alzheimer’s disease when they are 75 days old. The resulting offspring also formed plaques at this age, even though their BACE1 levels were approximately 50% lower than normal. Remarkably, however, the plaques began to disappear as the mice continued to age and lose BACE1 activity, until, at 10 months old, the mice had no plaques in their brains at all.

“To our knowledge, this is the first observation of such a dramatic reversal of amyloid deposition in any study of Alzheimer’s disease mouse models,” says Dr Yan, who will be moving to become chair of the department of neuroscience at the University of Connecticut this spring.

Decreasing BACE1 activity also resulted in lower beta-amyloid peptide levels and reversed other hallmarks of Alzheimer’s disease, such as the activation of microglial cells and the formation of abnormal neuronal processes.

Loss of BACE1 also improved the learning and memory of mice with Alzheimer’s disease. However, when the researchers made electrophysiological recordings of neurons from these animals, they found that depletion of BACE1 only partially restored synaptic function, suggesting that BACE1 may be required for optimal synaptic activity and cognition.

“Our study provides genetic evidence that preformed amyloid deposition can be completely reversed after sequential and increased deletion of BACE1 in the adult,” says Dr Yan. “Our data show that BACE1 inhibitors have the potential to treat Alzheimer’s disease patients without unwanted toxicity. Future studies should develop strategies to minimize the synaptic impairments arising from significant inhibition of BACE1 to achieve maximal and optimal benefits for Alzheimer’s patients.”

Controlling HSP27 “switch” could be key to sepsis therapeutics