Biophysicists in Russia have gained greater understanding about the structure of nanofibrous scaffolds – termed nanoscaffolds – in a study that is researching heart tissue regeneration. 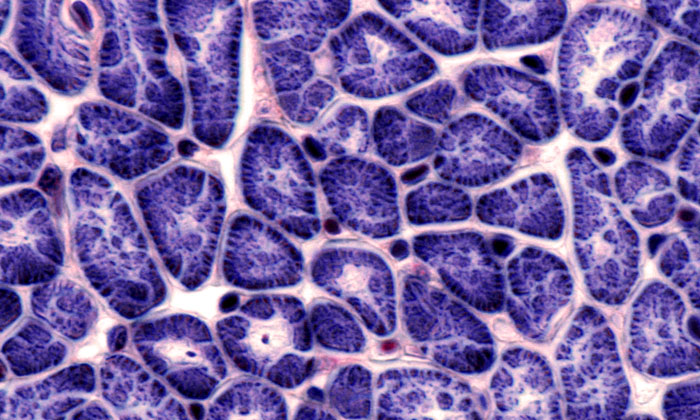 Biophysicists from the Moscow Institute of Physics and Technology (MIPT) have studied the structure of a nanofibrous scaffold, as well as its interaction with rat cardiac cells, as part of a study into heart tissue regeneration. They discovered that heart muscle cells, known as cardiomyocytes, envelop nanofibres as they grow, while fibroblasts – connective tissue cells – tend to spread out on fibres forming several focal adhesion sites.

The study was conducted at MIPT’s Laboratory of Biophysics of Excitable Systems in collaboration with researchers from the Shumakov Federal Research Center of Transplantology and Artificial Organs and the Institute of Theoretical and Experimental Biophysics of the Russian Academy of Sciences.

Commenting on their observations of cell behaviour on the nanoscaffolds, Professor Konstantin Agladze, head of the Laboratory of Biophysics of Excitable Systems, said:

“Using three independent methods, we discovered that during their development on a nanofibrous scaffold, cardiomyocytes wrap the fibres on all sides creating a ‘sheath’ structure in the majority of cases. Fibroblasts, by contrast, have a more rigid structure and a much smaller area of interaction with the substrate, touching it only on one side.”

Regenerative medicine seeks to repair or replace lost or damaged human cells, tissues, and organs. Tissue engineering is often the only way to restore the functions of the human heart and achieve recovery. Creating “patches” for a damaged heart, however, demands more than merely understanding the properties of the corresponding tissue cells; it requires an understanding of their interaction with the substrate, as well as the surrounding solution and neighbouring cells.

Vital for the growth, development, and formation of regenerating tissues is the substrate on which cells are grown. The scaffolds used for cardiac tissue engineering are based on a matrix of polymer nanofibres. Nanofibres vary in terms of elasticity and electrical conductivity, and they may have additional ‘smart’ functions that enable them to release biologically active molecules at a certain stage. Nanofibres are designed to mimic the extracellular matrix that surrounds the cells and provides structural support.

Another application for nanofibres is as a medium for delivering substances into the surrounding cells to induce biochemical changes in them. Studying the interactions between the scaffold and heart cells is therefore essential for choosing the right nanofibre characteristics that would bring an artificial structure closer to that of a living organism.

The team conducted a three-stage study to determine the structural features of cardiac cells, as well as the nature of their interaction with the fibres.

First, the researchers studied the structure of cardiomyocytes and fibroblasts grown on a substrate of nanofibres using confocal laser scanning microscopy. This entails the illumination of tiny sections of the cells followed by point-by-point scanning to enable reconstruction of 3d structures in the micrometric range. The structure of cardiomyocytes and fibroblasts (the nucleus and the components of the eukaryotic cytoskeleton), as well as the fibre, was pre-stained with fluorescent antibodies. The resultant 3d images showed that both types of the studied cells were aligned along the fibres and had spindle-like shapes. However, this data alone was insufficient to study the cell-fibre interface.

Cell samples were then sectioned into ultra-thin slices in a plane perpendicular to the direction of the fibres and ‘photographed’ using transmission electron microscopy (TEM), which enabled the thickness and other properties of the material to be determined. Various cell structures absorb electrons that travel through the specimen in a different way. The researchers discovered that cardiomyocytes envelop nanofibres on all sides so that the fibre ends up being in the middle of the cell, while fibroblasts only touch it on one side. TEM made it possible to study the cross sections. Then, using scanning probe nanotomography, a comprehensive 3d model was created. The researchers took cells grown on a substrate of nanofibres and sliced them into 120-nanometre-thick sections. Their surface structure was studied with a silicon probe and reconstructed in 3d.

Cardiomyocytes have better adhesion than fibroblasts

The researchers observed some important aspects of the cell-fibre interaction.

Firstly, since stronger mechanical adhesion – i.e. cell-scaffold attachment – means cells are more stable growing on the substrate, cardiomyocytes will be firmly attached to the scaffold, while fibroblasts will be less stable.

Secondly, additional ‘smart’ scaffold functions, such as the release of growth factors – protein molecules that stimulate cellular growth – will also differ depending on the cell type. In the case of cardiomyocytes, the released substances will diffuse directly from the fibre through the cell membrane and into the cytoplasm. In the case of fibroblasts, however, a certain amount of these substances will leak out.

Thirdly, cardiomyocytes isolate the polymer fibres from the surrounding solution. Since they are responsible for the transfer of electromagnetic waves within the heart – and therefore for heart contractions – immersing the fibres of the scaffold completely in cardiomyocytes will enable researchers to test the electrical conductivity of the cells.

This study, as well as further investigation into the mechanisms of cell-substrate interactions, will enable the creation of nanofibers that would provide cells with the properties needed to form regenerative tissues.

The article was published in the journal Acta Biomaterialia.