Nanoparticles could provide a new treatment option for patients with AMD

Around 6.5 million Europeans currently suffer from AMD. Nanoparticles could potentially be used as carriers for drug treatments instead of injections… 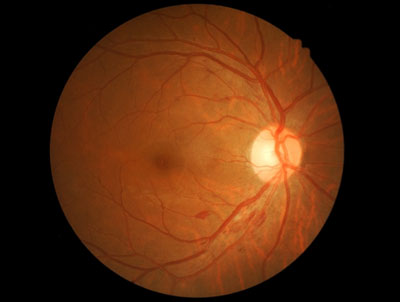 Around 6.5 million Europeans currently suffer from age-related macular degeneration (AMD). One way to treat this life altering condition is by delivering drugs right to the source – injecting them into the back of the eye.

At present this procedure may involve many injections and can be very uncomfortable for the patient, but a consortium of scientists from around Europe think they may have the solution.

Professor Neil Cameron of the University of Durham has created a system that utilises molecules called peptides that are capable of assembling themselves into nanoparticles. These biodegradable and biocompatible materials can be used as containers for therapeutic molecules, which can then be delivered to the desired area and released in a controlled fashion. “The particles we use are around 1000 times thinner than a human hair. This means that they are able to pass through the sub-conjuctival and sub-tenon routes into the eye that are less traumatic for the patient,” says Cameron.

As well as AMD, which occurs when cells in the highly sensitive area of the retina known as the macula become gradually damaged causing loss of central vision, there are a number of other conditions that require drug delivery to the retina through an injection to the back of the eyeball – at present, the only method for delivering these drugs. Cameron and his colleagues believe that their system might be able to provide a less distressing alternative.

This type of drug-delivery system has other advantages; one being that release of the drug is controlled. Peptides are commonly found in the body, and so endogenous enzymes naturally break them down. Thus, when the peptide-based micro- and nanoparticles containing the drugs are inserted into the eye, they biodegrade and release the drug slowly by diffusion. This gives them an advantage over drugs administered straight into the bloodstream, which have a harder time reaching the eye due to the blood-retinal barrier

In order to put this system into action, Cameron and his colleagues created a consortium of experts including materials scientists and biochemists. The project, named PANOPTES, has focused on creating methodologies for the industrial manufacture of novel peptide-based nanoparticles and nanocapsules for sustained drug delivery to the back of the eye.

The project has involved research groups from three European universities and all three groups have had success in producing nanoparticles. “We can make a few different types and sizes of particles,” says Cameron. “Some of them have solid cores, whereas others are more like little capsules, and we have successfully loaded each of them with a number of relevant drugs. The materials have been extensively tested in vitro, and we have also carried out some in vivo testing.”

PANOPTES aim has been to refine at least one drug delivery system and bring it to the point where it is ready for clinical trials and this looks very likely. Exact results cannot be disclosed at present due to commercial interests, but Cameron is confident that what they have created can lead to a solution for eradicating the discomfort in drug delivery for sufferers of AMD.