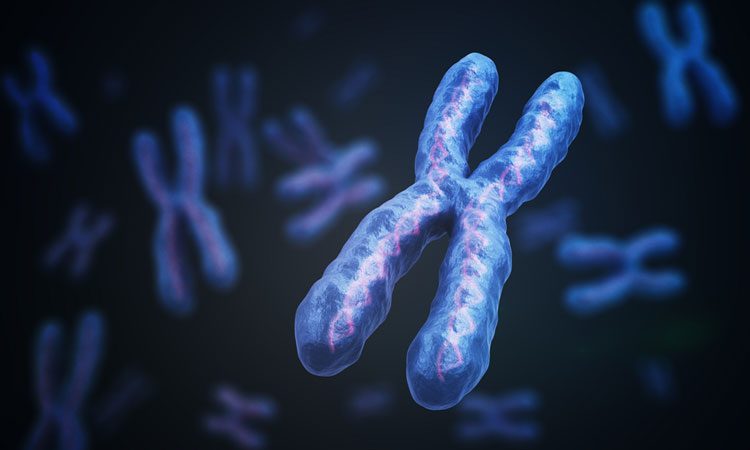 Scientists at the German Cancer Research Center (Deutsches Krebsforschungszentrum, DKFZ) have now found a cause for the frequent catastrophic events in the genetic material of cancer cells that have only been known for a few years – if an important DNA repair system of the cells has failed, this promotes fragmentation and defective assembly of the genetic material. Cancer cells with such a repair defect can now possibly be treated by a specific group of drugs.

Only a few years ago, scientists at the German Cancer Research Center (DKFZ), among others, described a new damage pattern in the genetic material of cancer cells – in a particularly aggressive type of childhood brain tumors, they discovered an unprecedented chaos in the cell nucleus. Sections of individual chromosomes were broken at innumerable points and reassembled incorrectly, so that whole parts were missing, while others were duplicated or incorporated in a wrong orientation. This chromosome catastrophe differed from all previously known genetic defects in tumors.

Scientists use the term chromothripsis to describe such a genetic disaster, which occurs in about twenty to thirty percent of all cancers. The trigger for this has so far been largely unknown. Dr Aurelie Ernst and her team at the German Cancer Research Center have now been able to show that the failure of certain genetic repair systems is one of the causes of chromosomal chaos.

Many environmental influences, such as UV rays, damage the DNA. Cells have an arsenal of mechanisms in place to repair such defects.

Dr Ernst’s team tested what happens if one repair system fails on genetically modified mice. In these animals, the tools used by the cell to repair broken DNA double strands were genetically switched off – specifically only in the neural precursor cells.

These mice developed malignant brain tumors (medulloblastomas and high-grade gliomas), which exhibited chromothripsis at a high frequency. The researchers noticed that this is almost always accompanied by extra copies of the Myc oncogene, which is known to be a strong driver of cell growth.

“If the DNA repair is defective and Myc nevertheless stimulates the division of these damaged cells, the risk of chaos in the genome is particularly high,” explained the DKFZ researcher.

The research team then looked at the connection between defective genome repair and chromosome chaos on human cancers, with results showing evidence to confirm this for brain tumors, melanomas and breast cancer. The researchers also found the involvement of the cancer-promoting Myc in human tumors.

“The chromosome chaos caused by repair defects is frightening at first sight,” explained Dr Ernst. “However, there are ways to specifically combat cancer cells harboring such defects: We can use drugs to switch off additionally another important DNA repair system. This leads to so much genetic damage that the cell is unable to survive. Healthy cells, on the other hand, which have all their repair systems, don’t mind these drugs.”

PARP inhibitors are already approved drugs that block a central DNA repair system. It may also be possible to develop other substances that attach to other DNA repair enzymes. “If the analysis of a patient’s tumor genome reveals evidence of chromothripsis, treatment with PARP inhibitors could be a new therapeutic option in the future,” explains the DKFZ researcher Ernst. “Of course, this has to be confirmed in preclinical and clinical tests.”