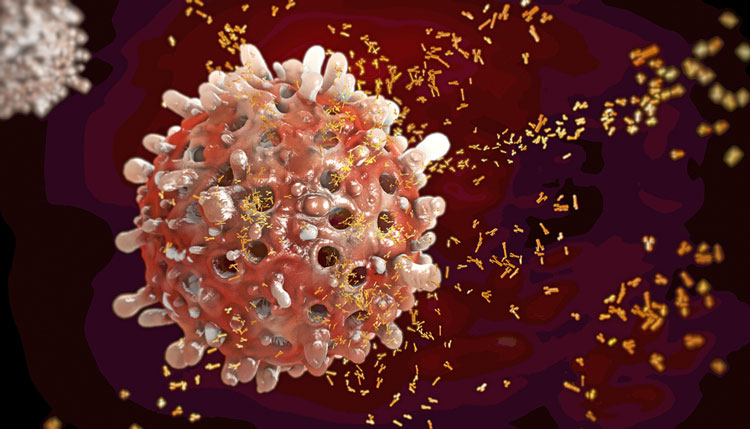 Cancer immunotherapy — efforts to better arm a patient’s own immune system to attack tumours — has shown great potential for treating some cancers. Yet immunotherapy doesn’t work for everyone, and some types of treatment can cause serious side effects.

In a new approach, researchers at the University of California San Diego School of Medicine are turning B cells, best known for producing antibodies, into factories that assemble and secrete vesicles or sacs containing microRNAs. Once internalised by cancer cells, these small pieces of genetic material dampen a gene that spurs tumour growth. In mice, breast tumours treated with this approach were fewer and significantly smaller than in untreated tumours.

“Once further developed, we envision this method could be used in situations where other forms of immunotherapy don’t work,” said senior author Maurizio Zanetti, MD, Professor of Medicine at UC San Diego School of Medicine and head of the Laboratory of Immunology at UC San Diego Moores Cancer Center. “The advantages are that this type of treatment is localised, meaning potentially fewer side effects. It’s long-lasting, so a patient might not need frequent injections or infusions. And it would likely work against a number of different tumour types, including breast cancer, ovarian cancer, gastric cancer, pancreatic cancer and hepatocellular carcinoma.”

In this study, Prof Zanetti and team used miR-335, a microRNA that specifically dampens SOX4, a transcription factor that promotes tumour growth. They added a miR-335 precursor to B cells in the lab. Once inside, through a naturally occurring process, the cells convert the precursor into mature, active miR-335 and package it into vesicles, small, membrane-coated sacs that bud off from the cell. Each B cell can produce 100,000 miR-335-containing vesicles per day — enough to treat 10 cancer cells.

And the treatment was long-lasting — miR-335 levels were still elevated in the treated mice 60 days after the vesicles and cancer cells were transplanted.

UC San Diego School of Medicine researchers developed a method to use B cells to manufacture and secrete microRNA-containing vesicles and showed they can inhibit tumor growth in mice.

“We were surprised to find that even small changes in cancer cell gene expression after miR-335 treatment were associated with specific down-regulation of molecules key to tumour growth,” said study co-author Hannah Carter, PhD, Assistant Professor of medicine at UC San Diego School of Medicine.

Other research groups and pharmaceutical companies are using tumour suppressor microRNAs therapeutically. What’s new here, said researchers, is the method for producing and delivering them.

According to Prof Zanetti, this therapy could be developed in two ways. First, by first harvesting vesicles from B cells in a lab, then administering only the vesicles, as they did here, or second, by administering the B cells themselves. He says the challenge now will be to develop ways to ensure the B cells or vesicles get as close to a tumour as possible. This would be easier in some types of cancer, where a tumour is readily accessible by injection. But many cancers are difficult to access. Prof Zanetti and colleagues are currently working to improve the delivery system, maximise efficiency and diminish side effects.

“Ideally, in the future, we could test patients to see if they carry a deficiency in miR-335 and have an overabundance of SOX4,” Prof Zanetti said. “Then we’d treat only those patients, cases where we know the treatment would most likely work. That’s what we call personalised, or precision, medicine. We could also apply this technique to other microRNAs with other targets in cancer cells and in other cell types that surround and enable tumours.”

The study is published in Scientific Reports.