The epigenetic protein, EZH2, was found to delay the development of acute myeloid leukemia (AML) but also switches sides to maintain tumour growth… 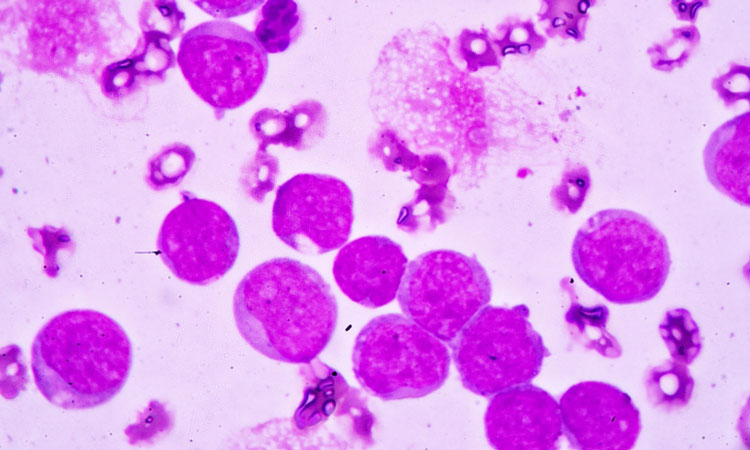 British researchers have discovered that an epigenetic protein called EZH2 delays the development of acute myeloid leukemia (AML) but then switches sides once the disease is established to help maintain tumor growth. The study suggests that targeting EZH2 could therefore be an effective treatment for AML, an aggressive blood cancer expected to kill over 10,000 people in the US alone this year.

EZH2 is an epigenetic protein that can control the activity of hundreds of genes by chemically modifying the histone proteins that package up the cell’s DNA. Increases in EZH2 activity are thought to promote the development of a variety of human tumors, including breast and prostate cancers, and several clinical trials are currently investigating whether drugs that prevent EZH2 from modifying histones could be used as cancer treatments.

Whether EZH2 also promotes the development of blood cancers like AML is unclear, however. Some evidence suggests that the epigenetic protein many actually prevent AML and other myeloid malignancies.

A team of researchers led by Professor Brian Huntly at the Cambridge Institute for Medical Research, UK, found that mice lacking EZH2 developed AML much faster than usual, indicating that the protein does indeed delay the development of AML. However, once AML had fully developed and established itself in the mice, deleting the EZH2 gene or inhibiting the EZH2 protein with a drug disrupted tumor growth and significantly prolonged the animals’ survival. Inhibiting EZH2 also prevented the growth of AML cells isolated from patients.

Prof Huntly and colleagues found that inhibiting EZH2 has conflicting effects on the development and maintenance of AML because the protein regulates almost completely different sets of genes at early and late stages of the disease. For example, during the initial stages of AML, loss of EZH2 causes cells to increase production of a transcription factor called Plag1 that accelerates the development of leukemia. But inhibiting EZH2 at later stages of AML has no effect on Plag1 levels.

“Our findings uncover novel and dramatically opposing functions of EZH2 during AML that appear dependent upon the phase of disease, with EZH2 functioning as a tumor suppressor in AML induction and as a facilitator of disease in established AML,” Prof Huntly said. “To our knowledge, this is the first description of an epigenetic regulator having both tumor–suppressive and oncogenic function in different phases of the same cancer. In addition, our work validates EZH2 as a therapeutic target with the potential to treat several different subtypes of AML.”