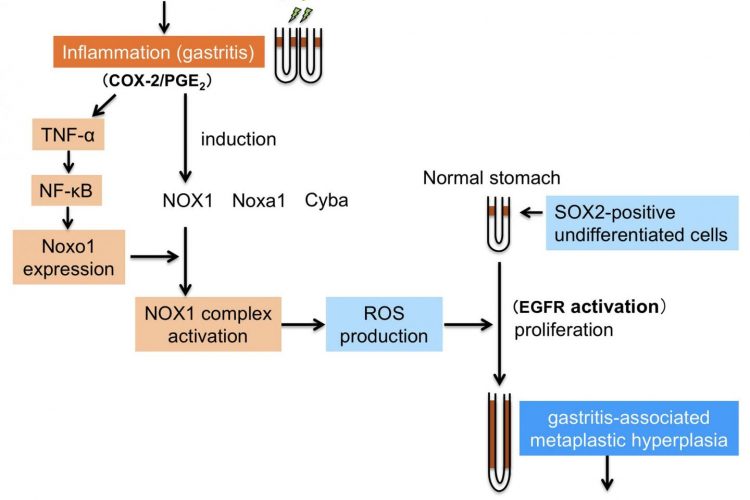 A schematic illustration of the role of NOXO1 and NOX1 in the inflammation-associated gastric tumorigenesis (credit: Kanazawa University)

The study, which was undertaken by researchers at Kanazawa University and the Japan Agency for Medical Research and Development, expands upon research which began in 1982 that reported a link between chronic gastritis and stomach bacterium Helicobacter pylori, triggering a flurry of research into this newly-identified pathogen.

These studies made it clear that in addition to its involvement in gastritis, H. pylori was a significant factor in the development of both peptic ulcers and gastric cancer. But while the link between the bacterium and disease was clear-cut, exactly how H. pylori caused gastric tumours remained the subject of much debate.

Now, four decades later, the link has finally been explained.

NOXO1 is a component of the NOX1 complex, which produces tissue-damaging molecules called reactive oxygen species (ROS). This can result in mutations in the DNA of stomach cells, leading to tumour formation. Inflammation caused by H. pylori infection also produces ROS, increasing oxidative stress in the stomach.

The researchers showed that inflammation caused excess production of NOX1-complex proteins in response to signals from NF-κB, a regulatory protein that turns on genes to combat stress or bacterial infection, and which is a major player in the inflammatory response. They also found that NOX1/ROS signalling caused gastric epithelial stem cells to multiply uncontrollably, resulting in tumour formation.

Knowing this, the researchers used a drug to suppress the activity of the NOX1 complex, which halted the growth of gastric cancer cells. Even more excitingly, disruption of NOXO1 in a mouse gastritis model stopped the proliferation of epithelial stem cells.

“We have finally been able to show that inflammation enhances the expression of NOXO1, which induces the proliferation of gastric epithelial stem cells, leading to gastric tumours,” Dr Masanobu Oshima, senior author of the study explained. “Gastric cancer is the fourth most common cancer worldwide and has the second highest mortality rate. If we can disrupt the NOX1/ROS signaling pathway in situ, we may be able to prevent the development of this aggressive disease.”