Severe COVID-19 symptoms may be caused by overactive neutrophils

An international consortium suggest that the severe symptoms of COVID-19, including Acute Respiratory Distress Syndrome (ARDS), could be caused by Neutrophil Extracellular Traps (NETs). 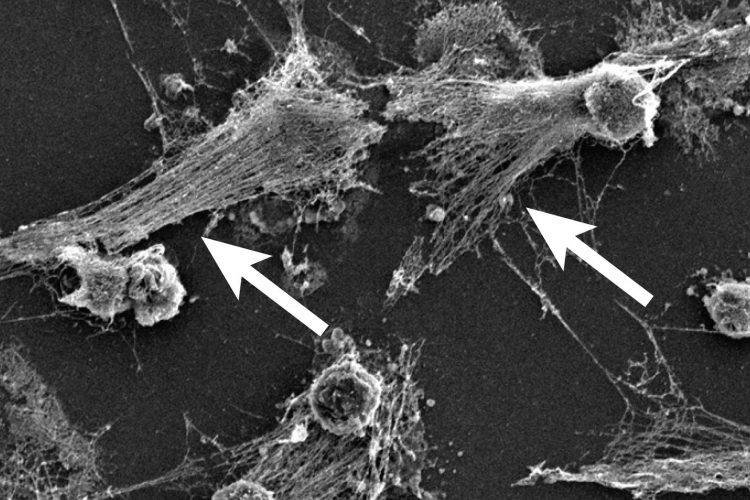 Part of the body's immune system, neutrophils detect bacteria and can expel their DNA (see arrows) to attack the bacteria with a gauzy web of DNA laced with toxic enzymes, called a NET [credit: Egeblad lab/CSHL].

The group, called the NETwork, is made up of 11 international research institutions, including Cold Spring Harbor Laboratory (CSHL), the Feinstein Institutes for Medical Research and the Research Institute of the McGill University Health Centre (RI-MUHC), all US.

Patients with severe COVID-19 infections develop Acute Respiratory Distress Syndrome (ARDS), pulmonary inflammation, thick mucus secretions in the airways, extensive lung damage and blood clots. According to researchers, all these symptoms can be the result of overactive white blood cells called neutrophils. The team said that when neutrophils detect pathogens, they can expel their DNA in a web laced with toxic enzymes (called a NET) to attack them. These NETs can ensnare and digest the unwanted pathogen but in cases of ARDS they damage the lungs and other organs.

“Given the clear similarities between the clinical presentation of severe COVID-19 and other known diseases driven by NETs, such as ARDS, we propose that excess NETs may play a major role in the disease,” said Dr Betsy Barnes, lead and co-corresponding author of the paper and professor at the Feinstein Institutes. “As samples from patients become available, it will be important to determine whether the presence of NETs associates with disease severity and/or particular clinical characteristics of COVID-19.” 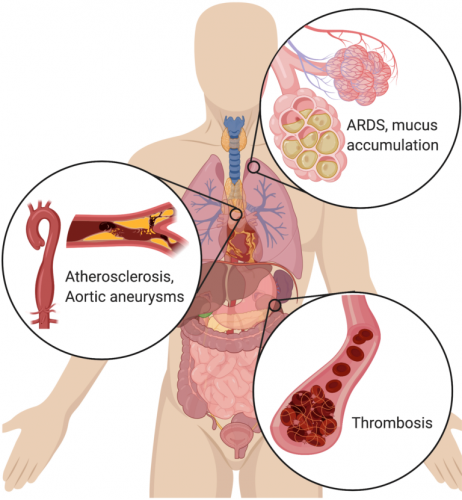 In the lungs, NETs drive the accumulation of mucus in cystic fibrosis patients’ airways. NETs also drive acute respiratory distress syndrome (ARDS) after a variety of inducers, including influenza. In the vascular system, NETs drive atherosclerosis and aortic aneurysms, as well as thrombosis (particularly microthrombosis), with devastating effects on organ function. BioRender was used to generate the illustration [credit: CSHL].

“NETs were identified in 2004, but many scientists have never heard of them. Most of the researchers in the NETwork have worked on NETs in other diseases and when we started hearing about the symptoms of the COVID-19 patients, it sounded familiar,” said Cold Spring Harbor Laboratory cancer biologist Dr Mikala Egeblad, who is senior and corresponding author of the paper.

Dr Jonathan Spicer, a clinician scientist at the RI-MUHC, Assistant Professor of Surgery at McGill University and a thoracic surgeon, said: “We see in these patients severe lung damage known as ARDS, another serious problem caused by excess NETs and seen in cases of severe influenza. In addition, their airways are often clogged with thick mucus and unlike most severe lung infections, these patients tend to form small clots throughout their body at much higher rates than normal. NETs have also been found in the blood of patients with sepsis or cancer, where they can facilitate the formation of such blood clots.”

The various NETwork institutions are now working to establish if NETs are a common feature of COVID-19 cases. The hope is that, if they find excess NETs cause the severe symptoms of COVID-19, then there is a new avenue for treatment approaches, including repurposing drugs used in other NET and neutrophil-driven diseases, such as cystic fibrosis, gout and rheumatoid arthritis.