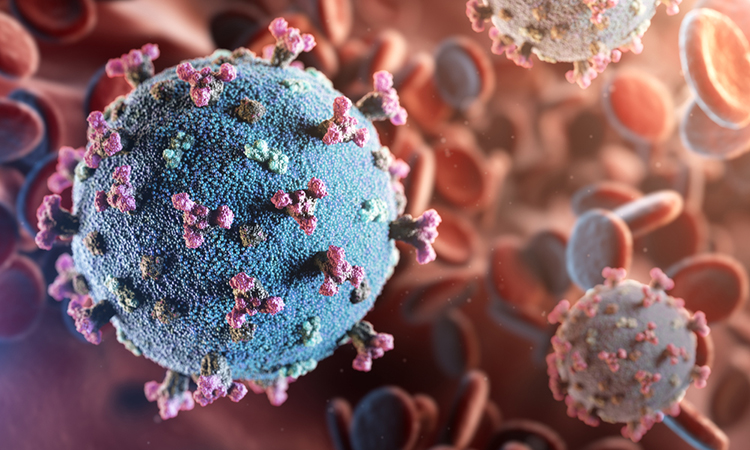 Researchers describe molecular markers in the blood which could be used to identify individuals at risk of developing severe COVID-19 symptoms during the early stages of the disease. According to the scientists, their observations also extend our understanding of the pathophysiology and clinical progress of COVID-19.

Since the start of the COVID-19 pandemic, a wide range of symptoms have been associated with the disease. These have varied from mild, flu-like symptoms to the severest manifestations: pneumonia, sepsis, Acute Respiratory Distress Syndrome (ARDS) and organ failure. However, the severe symptoms are not limited to the respiratory system – a smaller proportion of people have also developed severe gastrointestinal and/or cardiovascular symptoms as well as neurological manifestations after infection with SARS-COV-2, the virus which causes COVID-19 disease. This is thought to be because the angiotensin-converting enzyme 2 (ACE 2) receptor which SARS-COV-2 uses to enter host cells is also expressed by organs other than the lungs, including the heart, liver, kidney, pancreas, small intestines and Central Nervous System (CNS) – especially in the non-neuronal cells of the brain, called glial cells.

To better understand host responses to COVID‐19 pathophysiology, researchers took a multi-omics approach, combining cutting edge transcriptomic, proteomic and metabolomic technologies to identify significant correlated molecular alterations in patients with severe COVID-19. In their study, the team evaluated data from 66 COVID‐19‐infected patients (16 with severe symptoms and 50 with mild) and 17 healthy controls (without the virus).

To determine whether COVID-19 pathophysiology was associated with particular molecular changes, the team collected serial blood and throat swab samples from all participants. In total they examined 23,373 expressed genes, 9,439 proteins, 327 metabolites and 769 extra-cellular RNAs (exRNAs) circulating in the blood.

According to the team, the profiles were significantly different between all three groups. The primary differences noted for the two COVID-19 symptom classes were that those with severe symptoms had chronically overactive neutrophils, as well as heightened expression of type 1 interferon and pro-inflammatory cytokines, whereas patients with mild symptoms had robust T cell responses, that the team presume helped arrest disease progression.

Samples taken from COVID-19 patients, regardless of disease severity, had a significant downregulation in the tricarboxylic acid or “Krebs” cycle (TCA) and glycolytic pathways – used by the cell to release stored energy. Conversely, well known host defence pathways, such as the T cell receptor signalling pathway, were elevated in patients with COVID-19.

The team also reported an association between viral load and disease prognosis in severe COVID-19 patients. Six of the participants with severe disease died during the study. According to the researchers, when they were admitted to hospital all of these patients had SARS-CoV-2 RNA loads in their throats significantly higher than those who developed severe symptoms but survived. The team noted that T and B cell receptor signalling pathways were associated with viral load changes in severe patients who survived.

At the end of their study, the team describe specific molecules that could act as biomarkers to predict COVID-19 outcomes. They used these to create prognostic classification models, one of which, they suggest, could act as a framework for identifying patients likely to develop severe symptoms in advance so that treatments can be targeted accordingly.

The study was published in The EMBO Journal.