Mice with increased levels of TTP resistant to inflammation

Compounds that produce elevated levels of TTP in humans may offer an effective treatment for inflammatory diseases, such as rheumatoid arthritis and multiple sclerosis… 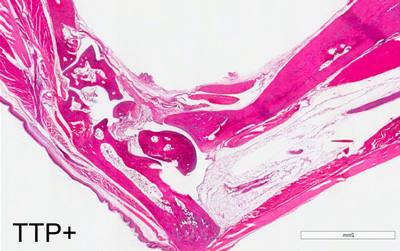 Increasing the level of a naturally-produced protein, called tristetraprolin (TTP), significantly reduced or protected mice from inflammation, according to research from the US National Institutes of Health (NIH).

The researchers say the results suggest that pharmaceutical compounds or other therapeutic methods that produce elevated levels of TTP in humans may offer an effective treatment for some inflammatory diseases, such as rheumatoid arthritis, psoriasis, and multiple sclerosis.

Perry Blackshear, M.D., D.Phil., a researcher at the National Institute of Environmental Health Sciences (NIEHS), part of NIH, led the team that genetically altered the TTP gene in mice, so that the animals produced higher than normal amounts of the TTP protein. The mice were then tested using experimental models of rheumatoid arthritis, psoriasis, and multiple sclerosis. Experimental models are used to study processes thought to be involved in human diseases, and to evaluate and select therapies that affect these processes.

“Mice with more TTP in their bodies were resistant to the inflammation that accompanied these experimental models of disease,” Blackshear said. “We also found evidence of how TTP is providing this protection.”

Blackshear said TTP exerts its beneficial effect by targeting several messenger molecules that encode cytokines, proteins known to be involved in inflammation. TTP binds to these molecules and destabilises them, resulting in lower levels of cytokines and, thus, decreased inflammation.

TTP based treatments could be cost effective and easy to administer

Blackshear anticipates that TTP-based treatments would be cost effective and easy to administer. Future work will seek to identify compounds that have similar effects on the levels of TTP in the body.

“Many current therapies for these inflammatory diseases are expensive and require the medicines be introduced into the body under the skin, in the muscle, or by intravenous injection,” said Sonika Patial, D.V.M., Ph.D., a research fellow in Blackshear’s research group and lead author on the paper. “Our ideal treatments would be administered orally in pill or liquid form.”