Inhibiting cell death may prevent the spread of cancer

New research suggests that drugs to prevent, rather than encourage, cell death might be effective at fighting cancer – contrary to how many of the current chemotherapy drugs work… 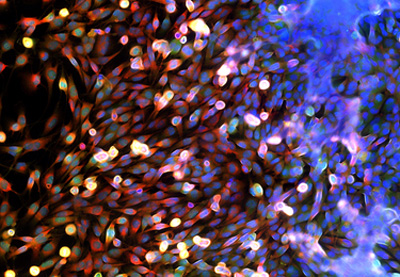 Cancer cells kill off surrounding cells to make room to grow, according to new research.

Although the study was carried out using fruit flies, its findings suggest that drugs to prevent, rather than encourage, cell death might be effective at fighting cancer – contrary to how many of the current chemotherapy drugs work.

Researchers at the Wellcome Trust/Cancer Research UK Gurdon Institute, University of Cambridge, used fruit flies genetically manipulated to develop intestinal tumours to show for the first time that as the tumour grows and its cells proliferate, it kills off surrounding healthy cells, making space in which to grow.

Dr Eugenia Piddini, who led the research, believes the finding may answer one of the longstanding questions about cancer. “We know that as cancer spreads through the body – or ‘metastasises’ – it can cause organ failure,” she says. “Our finding suggests a possible explanation for this: if the tumour kills surrounding cells, there will come a point where there are no longer enough healthy cells for the organ to continue to function.”

The cancer cells encourage apoptosis the surrounding cells, though the mechanism by which this occurs is currently unclear and will be the subject of further research.

Drugs that inhibit apoptosis may prevent the spread of cancer

By manipulating genetic variants within the surrounding cells to resist apoptosis, the researchers were able to contain the tumour and prevent its spread. This suggests drugs that carry out the same function – inhibiting cell death – may provide an effective way to prevent the spread of some types of cancer. This is counter to the current approach to fighting cancer: most current drugs used in chemotherapy encourage cell death as a way of destroying the tumour, though this can cause ‘collateral damage’ to healthy cells, hence why chemotherapy patients often become very sick during treatment.

In fact, some drugs that inhibit cell death are already being tested in clinical trials to treat conditions such as liver damage; if proven to be safe, they may provide options for potential anti-cancer drugs. However, further research is needed to confirm that this approach will be suitable for treating cancer.

“It sounds counterintuitive not to encourage cell death as this means you’re not attacking the tumour itself,” says Dr Eugenia Piddini. “But if we think of it like an army fighting a titan, it makes sense that if you protect your soldiers and stop them dying, you stand a better chance of containing – and even killing – your enemy.”