More than 90% of drugs that enter clinical evaluation fail to reach approval because of lack of efficacy or unexpected toxicity. This failure rate is in large part due to the use of overly simplistic in-vitro cell-based assays and animal models with limited predictive value… 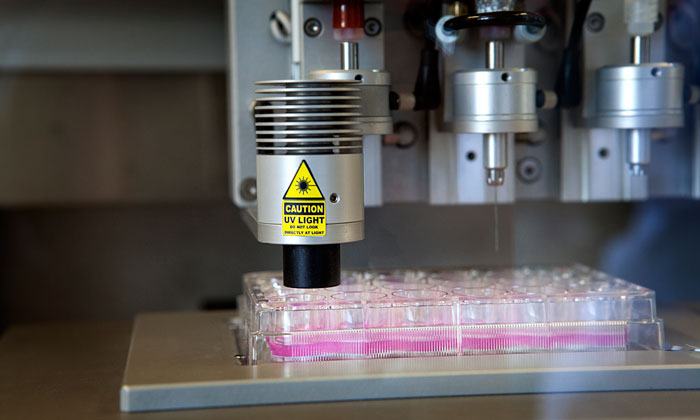 As knowledge of cellular processes in humans and research technologies have improved, it has become more apparent that the complexity of cellular pathways, disease-relevant cellular backgrounds, cell-cell interactions, and cellular-microenvironment interactions in tissues are critical for the understanding of drug efficacy and toxicity in humans, and are considerations that need to be integrated into future drug discovery in vitro cell-based assays.

Three-dimensional (3-D) cell cultures that mimic the spatial organisation of cells in a live tissue in vivo are now being developed to test the activity of therapeutics in possibly more predictive assay systems. These 3-D culture models range from spheres and organoids to bioprinted tissues. Here, we discuss the use of 3-D tissue models for drug screening and, in particular, the use of 3-D bioprinting to fabricate such tissues from the perspective of a laboratory focused on drug screening and discovery.

3-D bioprinting is the process of producing spatially-controlled patterns of functionally viable tissue-relevant cells using a bioprinter. The application of 3-D bioprinting to tissue repair and regenerative medicine to replace damaged tissues and organs has fuelled the recent interest in this field of tissue engineering.3-6 In addition, 3-D bioprinting of human tissues carries the potential to accelerate the drug discovery process by bridging the predictability gap between in vitro and in vivo assay systems and positive clinical outcomes.7-11 The added promise of these 3-D tissue models is that they will reduce animal testing, and perhaps in the future eliminate animal testing, expedite drug development, enhance experimentation capabilities, and save valuable time and funding.

Although 3-D printing has been commoditised to the point that 3-D printers are now commercially available at affordable costs, 3-D bioprinters to fabricate tissues are still specialised instruments manufactured by only a few companies. Several bioprinting cell-compatible methods are being used, including laser-assisted,12,13 inkjet,14 and extrusion-based bioprinting.15,16 Extrusion-based bioprinting is perhaps the most popular of the commercially available bioprinters, using either pneumatic micro-extrusion (air-pressure), mechanical micro-extrusion (screw), or solenoid micro-extrusion, because they are compatible with hydrogels of a broad range of viscosities and their reduced shear stress.

Bioprinter selection is dictated by the application of interest, whether organ printing for regenerative medicine or developing tissue models for drug testing or screening. For drug screening it is advantageous to have a versatile and modular bioprinter with multiple printing heads for simultaneous use in different bioprinting modes in the same run, in a customisable manner, including micro-extrusion or inkjet, small dead and flexible working volumes, temperature control and UV-crosslinking, to enable different hydrogels that best yield the desired tissue architecture features to be used, different cell dispositions modes and biocompatibility. In addition, easy calibration and positioning of the needles in a variety of different printing vessels, accurate pressure control for reproducible pattern printing, and a computer-assisted design (CAD) software interface that it is easy to use and can create defined spatial patterns, are all desirable.

Bioinks are made up of cells and hydrogel materials that have the right rheological properties of viscosity, low shear stress and biocompatibility to provide the appropriate printability, scaffolding and extracellular material and composition to support tissue structures.17-19 Hydrogels need to provide adequate cell attachment properties, be biodegradable when needed so that cell-secreted extracellular matrix can eventually provide the natural scaffolding and the adequate stiffness for each type of tissue. Cell-laden hydrogels are the most commonly used bioinks because of their adaptability to extrusion-based bioprinting.16 Hydrogel formulations include natural hydrogels such as alginate,20,21 gelatin,22,23 fibrin, collagen, and hyaluronic acid,24,25 as well as synthetic hydrogels such as pluronic hydrogels26 and polyethylene glycol,27 chemically modified variants of both, and in most cases, mixtures are used. The process of choosing the composition of a bioink mixture is based on experimentation and development of compositions with optimal viscosity for printing, shear thinning, stiffness and degradation kinetics, to maintain a printed structure after printing and minimise collapse, control shrinkage and remodelling of the tissue, and biocompatibility, so that cells attach and are viable and functional.28-30

For the purpose of drug discovery, we envisage the development of 3-D bioprinting protocols for the production of a portfolio of tissue models of increasing complexity in microwell plate format, starting with healthy/wild-type cells, for the purpose of initial tissue validation and toxicity testing, and then switching to disease cells by introducing patient primary or iPSC-derived cells in a ‘plugging-in’ modular approach. Protocols for the efficient and automated multi-step cellular maturation of iPSC to the desired differentiated cells are being developed and rigorously standardised and should allow for the robust scale-up in the production of enough cells to yield bioprinted tissues for drug screening.31,32 The use of autologous-iPSC cells will also enable the production of ‘personalised’ tissues. The challenge will remain in finding media conditions in which all the different types of cells in a tissue survive and remain functionally active at the appropriate differentiation stage, and making the relevant cell-cell and cell-stroma interactions.

Methods to quantitatively determine the architecture and function of the fabricated tissues and determine drug effects are key components of drug discovery using 3-D bioprinted tissues. A battery of technologies are being used to characterise the fabricated tissues, both to quickly and efficiently control for consistency upon scale-up, and to quantitate the effect of a drug treatment on a disease phenotype on the tissues. Different technologies with a range of resolution, depth of tissue penetration, and sample processing throughput, are needed. Current determination of the morphology of fabricated tissues relies on histology techniques. Although histology is the gold standard technique for tissue validation during tissue development, the sample processing throughput for this technique is too low to use in a drug discovery setting, whether it is for quality control (QC) of tissue production or for compound screening.

Fluorescence microscopy techniques provide high resolution and the sample processing speed needed for screening and are routinely used in high-throughput screening for drug discovery. However, despite the broad use of confocal microscopy, imaging of tissues poses the challenge of limited depth of penetration.33 Light sheet microscopy is emerging as a rapid fluorescence technique to enable cellular resolution imaging and depth of penetration.34 Nevertheless, improved imaging techniques that are non-destructive, non-invasive and with deep tissue penetration are needed.33 In this regard, imaging technologies such as optical coherence tomography (OCT)35-37 and reflectance confocal microscopy38 are examples of technologies already used in the clinic for tissue imaging and might be adapted to tissue imaging in vitro. Other technologies based on mass spectrometry, such as MALDI,39-41 are also being applied to the detection of biological molecules in tissues slices and producing images of tissue distribution of molecules that are challenging to detect by immunostaining, such as lipids42,43 or glycoproteins,44,45 as well as to study the penetration of small molecules.46,47 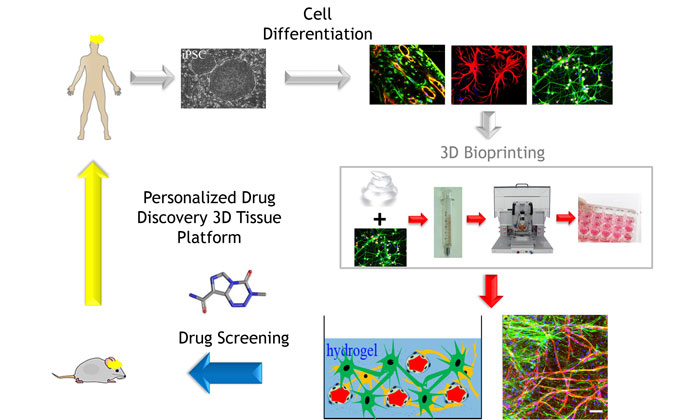 There is a need to develop robust and pharmacologically validated new alternative cell-based models of diseases to enable large-scale compound testing for drug discovery and development. 3-D bioprinted tissue models are being developed as native-like disease-in-a-dish assays for more predictive efficacy and toxicology testing. Focus on technical standardisation, rigorous QC, reproducibility, pharmacological benchmarking, and thoughtful integration and sharing of the results so that the knowledge derived from different improvements can be used as guiding principles by the drug screening and development community in a cost-effective and logical manner is critical. Increased complexity of the bioprinted tissues including disease iPSC-derived cells, vasculature,48-52 and inclusion of immune cells to develop immunocompetent models will further increase the physiological disease relevance of these tissue models. A truly personalised medicine circle for drug discovery as depicted in Figure 1, where a battery of 3-D tissue models provide more clinically relevant data during the different stages of drug development, is now possible and will likely become a reality in the near future.

MARC FERRER is currently a Team Leader in Biomolecular Screening and 3-D Tissue Models at NCATS. He was a postdoctoral fellow at Harvard University from 1995-1999, using structurebased chemical approaches for the development of anti-HIV small molecules. He joined the Department of Automated Biotechnology at Merck Research Laboratories in 1999, where he became Director of Assay Development and High-Throughput Screening. In 2010, he joined the NIH Chemical Genomics Center, where he leads programmes for the discovery of small molecule probes, drug combinations, and is pursuing his interest in the development of physiologically relevant disease-in-a-dish assays using stem cells and 3-D tissue models for personalised drug discovery and development.

ANTON SIMEONOV is the scientific director of the intramural Division of Preclinical Innovation at NCATS. The author or inventor of more than 145 peer-reviewed scientific publications and patents, Simeonov has a truly diverse background, ranging from bioorganic chemistry and molecular biology to clinical diagnostic research and development. He trained as a postdoctoral fellow at the Scripps Research Institute under Richard Lerner and Kim Janda. Prior to joining NIH in November 2004, Dr Simeonov was a senior scientist at Caliper Life Sciences, a leading developer of microfluidic technologies, where he was responsible for basic research on novel assay methodologies and development of microfluidic products for research and clinical diagnostics.