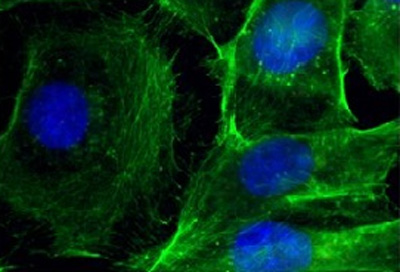 These are immunofluorescence images of cells. Left: control; right: after treatment with nanoparticles that silence BRAF. CREDIT: Jinjun Shi, Brigham and Women’s Hospital

A promising strategy for the treatment of anaplastic thyroid cancer (ATC) is RNA interference (RNAi) nanotechnology, but delivering RNAi agents to the sites of tumours has proved challenging.

Now, researchers at Brigham and Women’s Hospital, together with collaborators from Massachusetts General Hospital, have developed an innovative nanoplatform that allows them to effectively deliver RNAi agents to the sites of cancer and suppress tumour growth and reduce metastasis in preclinical models of ATC.

“We call this a ‘theranostic’ platform because it brings a therapy and a diagnostic together in one functional nanoparticle,” explains Jinjun Shi, PhD. “We expect this study to pave the way for the development of theranostic platforms for image-guided RNAi delivery to advanced cancers.”

RNAi allows researchers to silence mutated genes, including those upon which cancers depend to grow and survive and metastasise. Many ATCs depend upon mutations in the commonly mutated cancer gene BRAF. By delivering RNAi agents that specifically target and silence this mutated gene, the investigators hoped to stop both the growth and the spread of ATC, which often metastasizes to the lungs and other organs.

When RNAi is delivered on its own, it is usually broken down by enzymes or filtered out by the kidneys before it reaches tumour cells. Even when RNAi agents make it as far as the tumour, they are often unable to penetrate or are rejected by the cancer cells. To overcome these barriers, the investigators used nanoparticles to deliver the RNAi molecules to ATC tumours. In addition, they coupled the nanoparticles with a near-infrared fluorescent polymer, which allowed them to see where the nanoparticles accumulated in a mouse model of ATC.

By measuring the glow from the near-infrared fluorescent polymer, the team verified that nanoparticles had reached the primary site of ATC in the thyroid. The team found that the nanoparticles circulated for long periods of time in the blood stream and accumulated at high concentrations in the tumours.

In addition, the team reports evidence that BRAF had been successfully silenced at these sites. They found that, for cells grown in a dish and treated with the nanoparticles containing RNAi agents, cell growth was drastically slowed and the number of cancer cells that were able to migrate decreased by as much as 15-times. In mouse models, tumour growth was also slowed and fewer metastases formed.