A better understanding of how we could manipulate immune system conditions might aid to develop novel therapies against Alzheimer’s, Kizil argues… 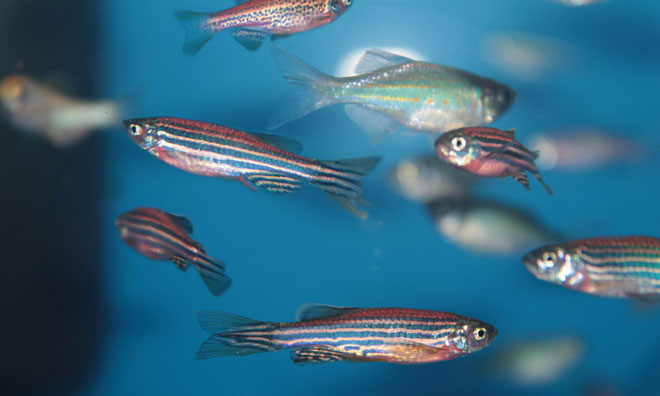 Though quite obviously different species, the Zebrafish and humans share an evolutionary past that translates into various similarities on the cellular and molecular scale.

Dr Kizil explains, “the regenerative skills apparent in zebrafish might lie dormant in humans and might somehow be activated by pulling the right strings. This is why we study if and how zebrafish cope with neurodegeneration, we want to understand the basic molecular mechanisms of such a regenerative aptitude in order to design better clinical therapies.”

In the current study, the Dresden-based neuroscientist and his co-workers succeeded in mimicking symptoms of Alzheimer’s disease in zebrafish brain. Conditions were triggered by Amyloid-Beta42 (Aβ42) peptides – one of the major contributors to the disease in human brains. Similar to our brains, Amyloid molecules accumulated in the neurons of zebrafish leading to immune response, synaptic degeneration, cell death, learning deficits and other dysfunctions. “This is the first time, such conditions have been generated in adult zebrafish through Aβ42 deposits”, Kizil says.

The significance of neuro-immune crosstalk

“We found that a molecule called Interleukin-4 is very much involved in the generation of neurons. The molecule is released by the dying neurons and immune system cells. It then acts on neural stem cells, which are the progenitors of neurons, by increasing their proliferation”, Kizil says. “Interleukin-4 has been known to be a player in immune response and inflammation. But to date, the direct role of IL4 on stem cell proliferation has not been shown.”

A better understanding of how we could manipulate inflammatory conditions might aid to develop novel therapies against Alzheimer’s, Kizil argues. “In humans inflammation does not seem to act as a positive cue for regeneration as it does in zebrafish. This is possibly because other factors interfere in a complex manner.

Our zebrafish model offers the opportunity to study such factors one by one in a reductionist manner. Besides, our study points to the significance of the immune response. That is to say: by tweaking the immune response, for example with drugs, and targeting the right cell types, we might unlock the potential of human neural stem cells to proliferate and build new neurons. Of course, the challenge remains as to what will happen to those new neurons. But first things first: we have to start from the stem cells.”