Download your complimentary copy of our latest digital journal
Free membership: sign up today to access all of our exclusive content
Hear from industry leaders in our upcoming webinars – reserve your place today!
Advertorial 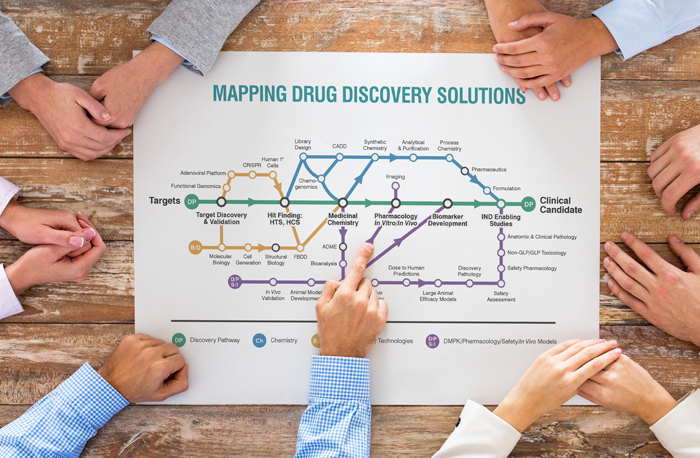 Today, the approach is much less insular. Researchers are more likely to set up a network of collaborators including academia and small companies, and are increasingly including contract research organizations (CROs) to share the high risk, high reward drug discovery journey. Where CROs historically operated in the highly regulated arenas of preclinical and clinical testing on a contract-by-contract basis, there has been a shift within the last decade as CROs have expanded their core expertise. Many CROs have created teams of industry-experienced drug discovery scientists, leading pharma and biotech companies to turn to outsourcing their discovery research earlier and earlier.

Between the steep costs, long development timelines and fierce competitive environment, pharmaceutical and biotech companies require more innovative and flexible models to make the discovery process faster and more efficient. Collaborations are an attractive way to deliver on those requirements, and including CROs within the collaborative framework ensures ready access to both scientific depth and scalability across all aspects of the drug discovery process – from medicinal chemistry, in vitro and in vivo biology, structural biology and computer-aided drug design to process chemistry for scale up of promising candidates.

The beginning:  The partnership began in 2005 with a single project trying to identify suitable inhibitors for a single kinase target. Medicinal chemists at Charles River and Genentech worked together to progress early hits all the way through to a development candidate.

Co-invention:  One specific focus of the expanded relationship was the identification of a small molecule inhibitor of a retinoic acid receptor-related orphan receptor (RORc). Using crystal structures of the receptors generated by Genentech scientists, Charles River scientists provided drug design input, medicinal chemistry and in vitro biology support. This collaborative approach led to the generation of multiple patent applications and co-authored publications surrounding the novel inhibitors the team identified.

Leadership: Project leaders from both companies were committed to ensuring all activities undertaken within the CRO environment were in line with project expectations. Frequent team meetings, seamless data transfer, rigorous screening assays and agreed-upon success criteria parameters were instrumental in creating a transparent and collaborative environment. Quarterly updates to a committee comprised of senior managers from both companies provided a forum for strategic input, and made sure the work was moving forward, bottlenecks were identified and addressed and the program remained on budget.

Results: To date, this collaboration has generated seven development candidates.

Not every program is the same, nor does a single perfect collaborative model exist. Interactions between companies within a collaborative framework, and how the collaborations develop over time, are influenced as much by the internal resources of the partners as they are by their respective cultures. Other factors such as scientific depth, experience, innovation, flexibility, and communication also come into play. Whatever the collaboration’s structure and scope, the overarching goal of navigating the early discovery process as quickly and efficiently as possible is always shared, so recognizing and adapting to differences within each organization helps these partnerships thrive.

Charles River has successfully orchestrated more than 40 such integrated drug discovery programs with companies and collaborations of all shapes and sizes, contributing scientifically at every stage within the drug discovery process. Along the way, they have delivered 74 development candidates within those programs, and their scientists have been named as co-inventors on over 300 patents.