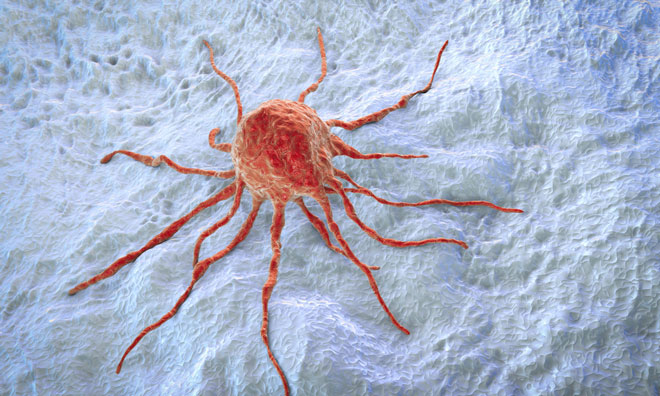 Researchers from Belgium led by Professor Dirk Elewaut of the VIB-UGent Center for Inflammation Research and the team of Professor Vanderkerken and Professor Menu at the Haematology and Immunology lab of the VUB uncovered a new way to enhance the function of a specific type of immune cell that destroys tumours in multiple myeloma, a form of bone marrow cancer considered incurable.

In their study, the scientists blocked a hormone-related mechanism that suppresses these immune cells, restoring their ability to battle tumour growth. The results are ground breaking in the fight against cancer, as they reveal a new form of cancer immunotherapy.

As we get older, more fat accumulates in our bone marrow. This increase in bone marrow fat coincides with an elevated risk of developing multiple myeloma. This phenomenon was the starting point of a study led by Dirk Elewaut (VIB-Ghent University, University Hospital Ghent), which sheds light on the role of leptin, a hormone produced by fat cells, in reducing the effectiveness of cancer-fighting immune cells called natural killer T cells (NKT cells) and increasing the risk of cancer.

The scientists were able to successfully block the leptin receptor to augment protection against cancer. This was a collaborative project with the Haematology and Immunology group of Professor Karin Vanderkerken and Prof Eline Menu at VUB.

NKT cell-stimulating immune therapies used today to fight cancer are limited due to the fact that after the initial stimulation, the cells go into a state called ‘anergy’, which makes them dormant and unresponsive for a period of time. This undermines their normal function to protect against harmful pathogens and mutated cells. As a result, if additional treatments are needed, NKT cells no longer respond as they normally do.

Professor Dirk Elewaut, “What makes our findings so important to the development of new cancer treatments is that we were able to restore the function of NKT cells under conditions when they would normally be in a state of anergy.”

To learn more about what happens when NKT cells go into anergy, the scientists used a form of microscopy for the first time in this application that gives them an in-depth look at processes in vivo. As a result, they were able to make valuable observations leading to new insights into immune response mechanisms.

Professor Dirk Elewaut, “NKT cells normally move around in our tissues, patrolling constantly for danger signals. We saw that when they are stimulated, they rapidly stop migrating and start to produce very potent mediators that protect against many diseases, such as cancer. By contrast, NKT cells in anergy were unable to stop and continued to move around. By blocking leptin receptors, we observed that we could modulate this movement.”

Translating results to other tumours

Cancer immunotherapy is a rapidly evolving area of medicine that has important and hopeful prospects for cancer patients. Following up on the study, future research could investigate whether the same mechanisms are at work in other types of tumours, especially in more aggressive cancers with currently limited treatment options.

Professor Dirk Elewaut, “Our goal is to further evaluate this principle in both haematological – or blood-related – tumours and non-haematological tumours, potentially shining a light on future therapeutic avenues for other types of cancer as well.”

Note: The lab of Dirk Elewaut is part of the VIB-UGent Center for Inflammation Research