Engineers have demonstrated a technique for making 3-D-printed biomaterials that can degrade on demand, which can be useful in making intricately patterned microfluidic devices… 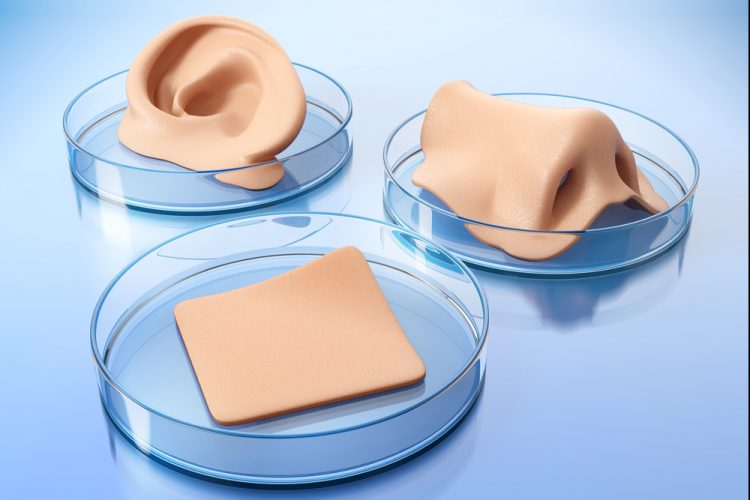 Engineers have demonstrated a technique for making 3-D-printed biomaterials that can degrade on demand, which can be useful in making intricately patterned microfluidic devices or in making cell cultures than can change dynamically during experiments.

“It’s a bit like Legos,” said Ian Wong, an Assistant Professor in Brown’s School of Engineering and co-author of the research. “We can attach polymers together to build 3-D structures, and then gently detach them again under biocompatible conditions.”

The researchers showed that degradable alginate structures are useful for making dynamic environments for experiments with live cells. They performed a series of experiments with alginate barriers surrounded by human mammary cells, observing how the cells migrate when the barrier is dissolved away. These kinds of experiments can be useful in investigating wound-healing processes or the migration of cells in cancer.

The biocompatibility of the alginate is promising for additional future applications, including in making scaffolds for artificial tissue and organs, said the researchers.

“We can start to think about using this in artificial tissues where you might want channels running through it that mimic blood vessels,” Wong said. “We could potentially template that vasculature using alginate and then dissolve it away like we did for the microfluidic channels.”

The researchers plan to continue experimenting with their alginate structures, looking for ways to fine-tune their strength and stiffness properties, as well as the pace of degradation.

The technique uses an ultraviolet laser controlled by a computer-aided design system to trace patterns across the surface of a photoactive polymer solution. The light causes the polymers to link together, forming solid 3-D structures from the solution. The tracing process is repeated until an entire object is built from the bottom up.

Stereolithographic printing usually uses photoactive polymers that link together with covalent bonds, which are strong but irreversible. For this new study, Prof Wong and his colleagues wanted to try creating structures with potentially reversible ionic bonds, which had never been done before using light-based 3-D printing. To do it, the researchers made precursor solutions with sodium alginate, a compound derived from seaweed that is known to be capable of ionic crosslinking.

“The idea is that the attachments between polymers should come apart when the ions are removed, which we can do by adding a chelating agent that grabs all the ions,” Prof Wong said. “This way we can pattern transient structures that dissolve away when we want them to.”

The researchers showed that alginate could indeed be used in stereolithography. And by using different combinations of ionic salts — magnesium, barium and calcium — they could create structures with varying stiffness, which could then be dissolved away at varying rates.

The research also showed several ways in such temporary alginate structures could be useful.

“It’s a helpful tool for fabrication,” said researcher. The researchers showed that they could use alginate as a template for making lab-on-a-chip devices with complex microfluidic channels.

“We can print the shape of the channel using alginate, then print a permanent structure around it using a second biomaterial,” Mr Valentin said. “Then we simply dissolve away the alginate and we have a hollow channel. We don’t have to do any cutting or complex assembly.”

The research is published in the journal Lab on a Chip.