Scientists in the USA have added a new dimension to the understanding of how cells alter their communication with one another by means of epithelial mesenchymal transition (EMT) during development, wound healing, and the spread of cancer. 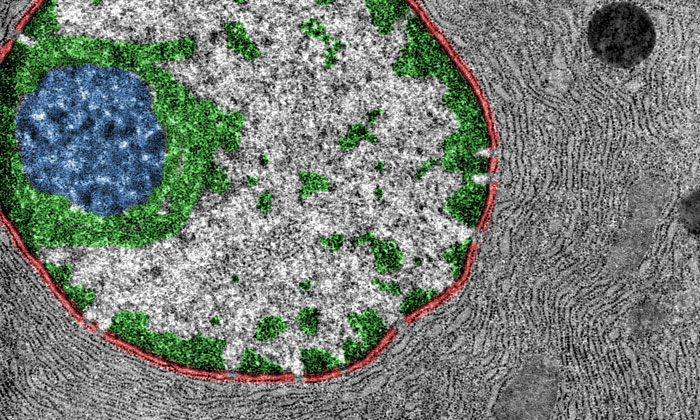 Commenting on the group’s findings, James Smyth, assistant professor in the Virginia Tech Carilion Research Institute (VTCRI) Center for Heart and Regenerative Medicine Research and lead author on the study, said: “We have gained a new insight into how an individual cell can dynamically modulate its synthesis of proteins from existing genetic instructions. This understanding of fine-tuning is new to the field.”

When tissue grows or heals, its outer layer of epithelial cells adopts characteristics that allow cells to migrate, change their size and behaviour, and act like other cell types; specifically, multipotent mesenchymal cells that are useful for making repairs. The process is known as the epithelial mesenchymal transition, or EMT.

“The problem is that EMT is also activated in various disease processes, such as fibrosis and cancer metastasis,” said Smyth, who is also an assistant professor of biological sciences in Virginia Tech’s College of Science. “Fortunately, these cells are very amenable to manipulation.

We’ve developed a powerful new tool to study this process to help us get to the heart of cancer metastasis. We can observe cancer cells change their communication with each other to become more invasive, to separate, and to disperse throughout the body.”

Smyth said researchers will also be able to use their techniques to better understand cellular responses to injury and disease in other pathologies, such as cardiac disease, as well.

Smyth normally studies communication between cardiac cells, with a specific focus on the role of a type of protein called connexin 43. Connexins are found in every tissue of the body. When six connexin 43 proteins come together, they form channels called gap junctions through which cells communicate.

Historically, people thought that the more connexin proteins in the cell, the more gap junctions the cell would make, thus enriching cellular communication. Like all proteins, Connexin 43 is synthesised from the message encoded in RNA that has read out the DNA code. The RNA can also encode for smaller pieces or fragments of connexins 20k, that ensure gap junction formation.

“It was thought that the amount of RNA correlated with the amount of connexin protein, but we now know that it’s much more complicated than that,” Smyth said. “The point of protein synthesis for translation is tightly regulated by the cell, and it is dynamic, changing with development and with disease.”

In this study, Smyth found that RNA and protein synthesis of connexin increased during EMT, but the amount of gap junctions on the surface of the cell did not increase as expected. In an effort to understand the reason for this, Smyth collaborated with Samy Lamouille, a research assistant professor at the VTCRI and expert in EMT and the cellular signalling involved in protein translation.

Lamouille, who is also a research assistant professor of biological sciences in Virginia Tech’s College of Science, focuses on understanding the mechanisms that regulate cell-to-cell interaction in cancer and how deregulated intercellular communication can lead to cancer progression through EMT.

“In this study, we found the formation of gap junction structures that allow cells to communicate was disrupted during EMT despite an abundance of connexin 43,” Lamouille said.

Normally, the cell makes the 20k connexin fragments to direct the full-length connexin 43 to the surface of the cell – a process that becomes altered to the detriment of gap junction formation.

Smyth and Lamouille hypothesised that the connexin (20k) fragments were being suppressed during the internal translation process of protein synthesis.

“We had this increase in proteins, but they weren’t going to the cell membrane surface,” Smyth said. “Could it be that the connexins were getting stuck somewhere?”

The researchers used the VTCRI’s super resolution microscope to examine individual molecules and analyse the connexins within the cells. They found that the full-length connexins were arrested in the cell’s Golgi apparatus, which acts as a packaging plant for proteins heading to the surface of the cell. To counteract the suppressed expression of 20K connexin fragments, Smyth used a lentivirus vector to cause the cells’ RNA to make 20k connexin, thereby rescuing the full-length connexin 43, the formation of gap junctions, and normal cellular communications.

Smyth is now applying the information he learned in this research to cardiovascular disease, where he’s seen the same cellular communication issues.

The study was published in Molecular Biology of the Cell.