Experimental drug combined with radiation extends the survival of GBM

A new study has shown that an experimental drug known as AZ32 significantly extends the survival of glioblastoma multiforme, the most common and deadly form of brain cancer… 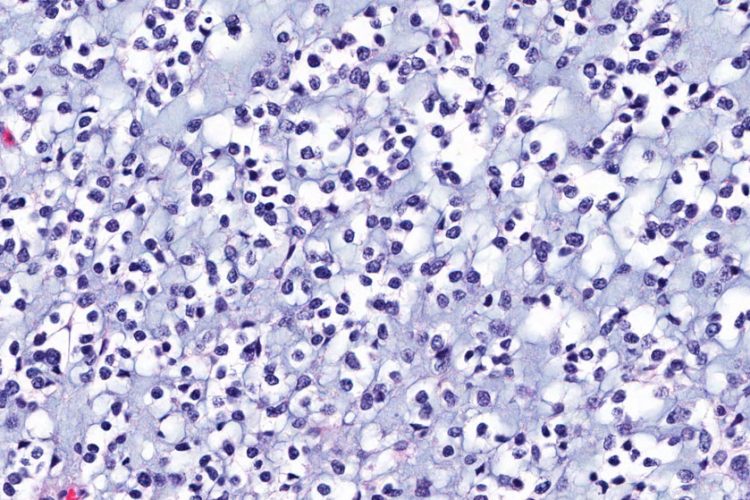 A new study has shown that an experimental drug known as AZ32 selectively sensitises brain tumours to radiation and significantly extends the survival of mouse models with human glioblastoma multiforme (GBM), the most common and deadly form of brain cancer. The study builds on the research of principal investigator Dr Kristoffer Valerie and has paved the way for a phase 1 clinical trial testing a similar but more effective experimental drug, AZ1390, in combination with radiation therapy for the treatment of brain cancer.

AZ32 is a member of a family of compounds referred to as ATM kinase inhibitors. ATM, or ataxia telangiectasia mutated, is an enzyme that facilitates repair of DNA damage in cells. Radiation therapy is the first-line treatment for GBM; however, glioma stem cells are often able to resist DNA damage caused by radiation. By inhibiting ATM, AZ32 was shown to disrupt the process by which brain cancer cells resist radiation while sparing and potentially protecting healthy brain tissue.

“In 2009 and 2013, we were the first to show that an ATM kinase inhibitor could make brain cancer cells and tumours sensitive to radiation,” says Dr Valerie, a member of the Developmental Therapeutics research program at Massey, in reference to his prior research. “This time with AZ32, we used an ATM kinase inhibitor that penetrates the blood-brain barrier. The combination of AZ32 and radiation was highly effective against GBM cells with mutant versions of the p53 tumour suppressor gene, which normally acts to promote radiation resistance.”

As many as 80 percent of GBM patients have cancers with mutant or dysfunctional p53 signalling. The combination therapy forced GBM cells to undergo mitotic catastrophe, which occurs when external stressors cause a cell to inappropriately enter into mitosis, a phase of the cell cycle where cell division occurs, and ultimately led to cell death.

“Our study is the first to show that an ATM kinase inhibitor that can be taken orally and able to penetrate the blood-brain barrier radiosensitisers GBM in mouse models. It is also the first to explain the p53-based mechanism by which ATM kinase inhibitors selectively sensitise brain cancers to radiation,” says Valerie. “We are excited to translate these findings into a clinical trial and hopefully bring more effective therapies to patients who typically do not have good outcomes.”

This study laid the groundwork for a phase 1 clinical trial (NCT03423628) led by AstraZeneca that will test AZ1390 in combination with radiation therapy for the treatment of brain tumours. It will assess the safety and tolerability of increasing doses of AZ1390 in combination with different regimens of radiation therapy for recurrent GBM, brain metastases and newly diagnosed GBM. The trial is estimated to enroll 132 patients at seven medical centers in the US and the UK, including VCU Massey Cancer Center.

The study has been published in the journal Molecular Cancer Therapeutics.