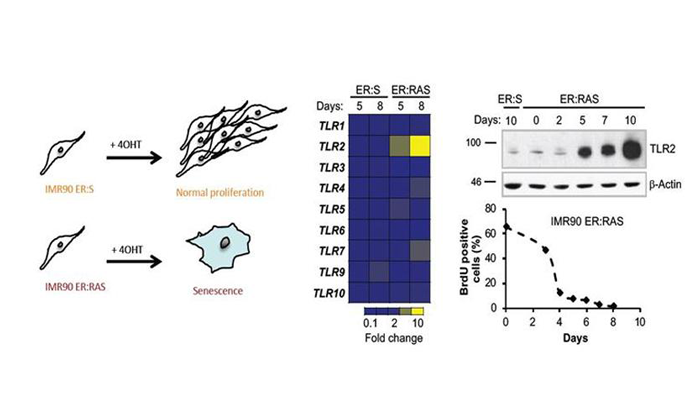 Researchers from the Cancer Research UK (CRUK) Edinburgh Centre and their collaborators have published evidence that an immune receptor (Toll-like receptor 2 – TLR2) senses host molecules (such as serum amyloids which are produced by cells undergoing oncogenic stresses) and mediates a type of senescence that can be a protection against cancer.

“Cellular senescence is a stress response programme characterised by a robust cell cycle arrest and the induction of a proinflammatory senescence-associated secretory phenotype (SASP) that is triggered through an unknown mechanism,” said the authors in the study’s abstract. “Here, we show that, during oncogene-induced senescence (OIS), the Toll-like receptor 2 (TLR2) and its partner TLR10 are key mediators of senescence in vitro and in murine models.”

The study was driven by Priya Hari, a PhD student, and led by Dr Juan Carlos Acosta from the Cellular Senescence and Tumour Suppression laboratory.  Through defining a new senescence-associated pathway that regulates priming of inflammasome – a critical regulatory component of the innate immune response and the first line of defence against pathogens and damage – the study provides new links between innate immune signalling and senescence.

The study’s authors propose that cellular senescence shares mechanistic features with the activation of innate immune cells and could be considered a programme of the innate immune response by which somatic cells switch their regular role to acquire an immune function under certain conditions of stress and danger, for instance upon oncogene activation.

The results of the study not only extend our knowledge of molecular mechanisms controlling senescence but, in the future, may also lead to new cellular-senescence-based strategies for the development of anti-cancer therapeutics or senotherapies based on innate-immune receptor manipulation.

The study, ‘The innate immune sensor Toll-like receptor 2 controls the senescence-associated secretory phenotype’ can be found in Science Advances.