A therapy has been developed which uses a synthetic RNA molecule developed to fight viruses to trigger an immune response against tumours in mice. 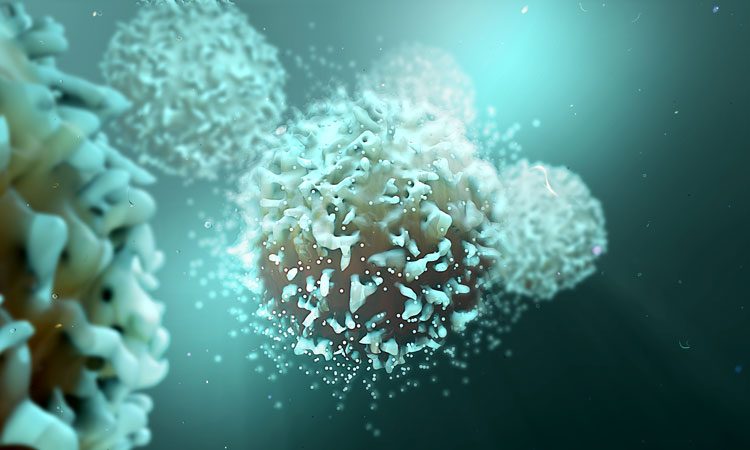 A new therapy has been developed which stimulates immune cells to shrink or kill tumours in mice. It is effective alone or in combination with existing cancer immunotherapies, and it appears to have lasting effects, the researchers said.

The research team, led by Yale investigators Akiko Iwasaki and Anna Pyle, examined whether a synthetic RNA molecule developed to fight viruses could also trigger an immune response against tumours. The molecule, called Stem Loop RNA 14 (SLR14), was specifically designed to activate a gene that detects viruses and other threats in cells.

“Our idea is to mimic a viral infection inside the tumour, tricking the immune system into thinking there is an infection and getting rid of it,” Iwasaki said.

To test this theory, the researchers experimented with several different approaches. They injected SLR14 directly into tumours in mice and observed destruction of the cancer by the immune system’s T cells. When they delivered the therapy to one site on a tumour, it also stimulated T cells to respond at a different site, suggesting a broad effect.

The researchers mimicked cancer metastasis in another experiment by spreading the tumour cells throughout the body and the results demonstrated that the SLR therapy in solid tumours could block further growth of metastatic cancer.

Further investigation showed that SLR14 is comparable to existing cancer immunotherapy drugs, and could enhance their anti-tumour response. “It has a significant effect as a single therapy agent, and when combined with current immune therapies, we see a synergistic effect,” Iwasaki noted.

The researchers also found that the immune system’s ‘memory’ was induced by the therapy, protecting the animals from recurrence. “We need to employ the immune system, which has a long memory, to find tumours and kill them before they become cancerous. We show this long-term immunity after injection of SLR,” she said.